On the way to my old office, there is a small public cemetery along the road among paddies. I was attracted its quietness and took a photo over 10 years ago. Here it is; 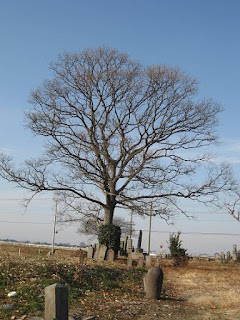 The fallen leaves were neatly raked away. It seemed weeds had been pulled during the summer. Some tomb stones were leaned a little bit but still were well cared for possibly the folks related with those ancestors in the tombs.

A couple of days ago, I parked beside the cemetery and looked it around.

A shot for the cemetry from far away; 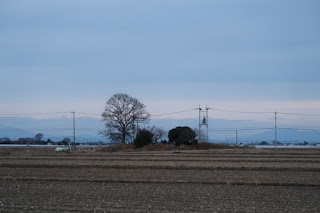 It looked as if time had stopped around it.

However, there were a lot of weeds, although already dead, overcrowded on the ground. All tomb stones, thickly covered with moss, have had their epitaph almost unreadable. In a couple of epitaphs, I could read that they were built in Taisho era, almost 100 years ago. Some tomb stones were destroyed or decayed. Some of the others were fallen down on the ground. 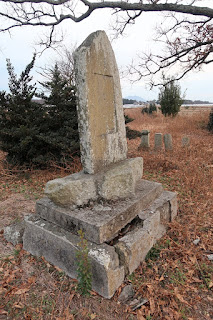 The tomb stones were generally simple and are supposed to be built by the ordinary people around here. They must have been cared for by their descendants  until recently. For the past 10 years, to my surprise, they seemed to have been abandoned and have been left deteriorated and destroyed without care.

There must be a background of this phenomenon in the society undergoing the change of reduction of population and of the aging process. Unlike the old tomb repeatedly posted in this blog which have been preserved for centuries, these tombs were not the objective of religious worship, even though folks must have had respect to those buried in these tombs one or two generations prior to themselves. That may be a reason why they have been abandoned. But why in such a short time span? I could not help suspecting the change in the society and in our consciousness are more drastic than we believe.

This change in funeral might be reviewed as told above. But it also means funeral or tomb construction is only for the folks left on the earth. If there is soul in ourselves eternally alive, it won't be confined in such a tiny space of tomb. At least, I would say no thanks for that. More importantly, we should keep their memories in our mind and recall them from time to time.

Walking around this cemetery, I was thinking of such a thing. The road I commuted to the office was still so straight as before. 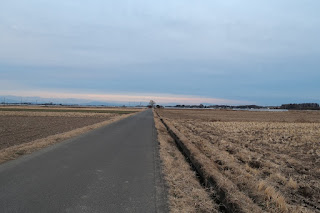