"Building A House in Santa Barbara"

I have been given a book titled "Building A House in Santa Barbara" by one of my elmers, Merle, K6DC, formerly W8BWC and then W6ULS. I have already told about him in a few posts in this blog such as this one.

He has been one of the elmers for me since my beginner days. He was essentially a DXer but was still enjoying the other aspects of ham radio. As written before, he used to enjoy ragchewing with his friends in Europe or Africa throuth the long path on 40 meters back in '60s. I have been listening to him at our midnight when he was working them with a huge signal. I could not resist breaking in him in such occasions. He was kind enough to let me in such a round table or for a QSO.

In my first visit to the US on business, as I have again written about this encounter elsewhere in this blog, I happened to have found his house in San Carlos and to know the door of his house. There was him appearing at the door. I have told him on my trip to the Bay Area but have never fixed a schedule to visit him. It was really an encounter by chance. He kindly accepted me there and took me for lunch at an Italian cuisine then. Ever since then, I have visited him and Marjorie, his wife, in Santa Barbara, where they moved in late '80s. Once with Hide JH0FBH and on the other time with Eric W6DU. Each visit was a really fond memory for me. He was not a very talkative person. But a very kind and sometimes humorous person.

In 1995, he has sent me a book titled above. I was very sorry but have read only a part of this his autobiography when I have lost it somewhere. I accidentally found it in a book shelf several days ago and read it through. The title sounded a bit strange to me at first. But I understand building a house in Santa Barbara was a dream for him and Marjorie who had grown up and spent young days in Michigan icing in winter around the Great Depression. Working hard, they have made it come true. Together with their much effort, it might be possible in the good old days when the USA was in great growth in economy. Along with the story of moving to Santa Barbara and construction of a house there, it is a really nice autobiography of Merle himself. I felt I had been listening to him telling about this story in his living room.

This is the cover of this book. It shows the house they have built in Santa Barbara. I realized it was shortly after they had built this Nr4 house along Alston Rd Santa Barbara. I have been there twice as told above, once in 1987 ant the latter in 1991, I believe. This was the eastern side of the house. On the opposite side, there was pretty steep slope toward the Pacific Ocean, where he used to set a fixed wire beam of 4 or 5 elements for 40 meters to the west, of course, it was for Europe and Africa via the long path. 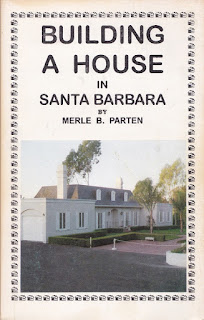 He has kindly given the words of acknowledgement to me in the Forward page. When I found this hand written words saying "To my best long time friend in japan.", you may know how much I was moved at it. 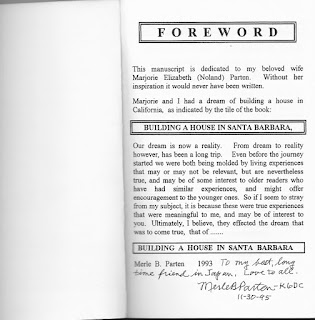 Even though the photo is blurred, this shows them in '90s. How deeply I miss both of them!