It has been a used instrument borrowed from a major instrument company that she practised with. She found it a bit tough to go on practising that old one, so that she wished to get a new one with better performance. She has been eagerly searching what instrument would be suitable for her or where to get such an item. She wanted me to go with her. I was a bit reluctant to say yes to her because I could not tell a good wind instrument from the others. Especially if she, still a real beginner, plays them by herself. She seemed sad to hear that and told me to ask our daughter to go together with her.

In  a few days, I agreed her to go with her. She has never had such a hobby which she could be devoted to so much by herself since we had married. Maybe, gardening is another hobby for her. It has become, however, like a kind of duty to water the plants at present. I knew how it is relieving us from the stressful routine to play instruments however unskilled we might be with them. I knew it was a time when she could be free from those troublesome reality. Won't it be a good hobby for her in the retirement soon as well? I decided to support her seeking a good flute.

We left home an hour before noon here. It was in Okubo in the downtown of Tokyo where we were heading to. How long has it been for us to go for such shopping in Tokyo? When we were engaged immidiately after graduation from the school, we promised to come to Tokyo for concerts etc often. It takes only an hour and a bit more to go to Tokyo on a train. But it turned out to take us even more than a couple of hours to reach somewhere in Tokyo in door to door. And our busy work and family duties have prevented us from coming there so often. I could not help recalling the past decades when we had lived together in the countryside away from Tokyo where we spent our student days. How much am I owing to her to reach our age? Hasn't there been anything which I could do for her in our life for the past 3 decades?

We were lost when we took off at the station of Okubo of the Yamanote line. We started to walk to the opposite way from that to the shop. In a few minutes, we realized that and took a rest at a restaurant there. In our engagement days, I remembered, we had often loafed around the downtown while we prepared for the MD examination together with our mutual firends. What a time of hope and pleasure! Now, almost having finished our career in our lives, we were settled down at a restaurant together taking late lunch and coffee.

The instrument shop was in an alley in Okubo away from the main street. The outlook was not very gorgeous. But a decent and neat shop inside. Not very crowded.  Very hospitable staff have welcomed us there. My wife has chosen several flutes and has tried playing each of them at a room for 2 hours long. We asked a personnel to play each of them for us. We have chosen a model by Muramatsu, a well known maker in Japan. It was not a very expensive model but should be good enough for a new comer. My wife has contacted with her flute teacher on cell phone, who was not very happy with any products from that maker. Finally, she agreed with my wife to get it since it was my wife's choice.

On the way back home, we both fell asleep on seats in the train. A bit tired. But a satisfying trip. Watching her being content with a new instrument she got in this trip, I thought I should bring her for shopping or concerts etc more often so far we could do that. 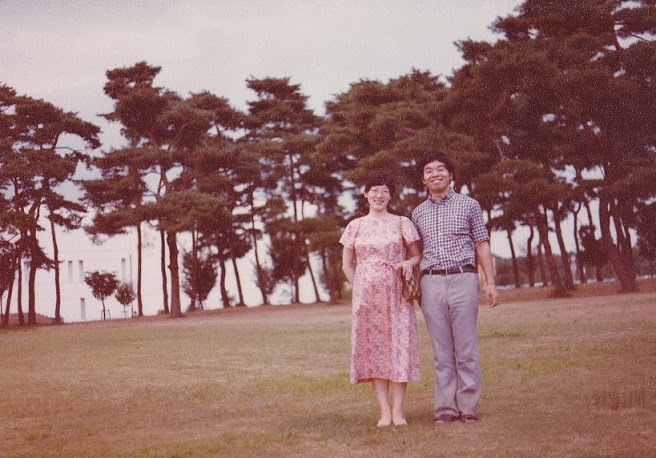 In our young days when we started residency at a med school hospital nearby.
Posted by Shin JA1NUT at 1:29 PM