For the past 3 days, I and my wife have been to Shikoku to meet my wife's old parents again. It was a 7 hours long trip. We haven't been bored on the way as we have talked a lot of the old days. After 34 years, we still have something to talk about. While talking about them, we often recall something we haven't shared yet. Or could we repeat the same topics which we used to talk in the past?

The city where the parents are in a nursing facility looked all the same as we visited there this winter. They both looked fine despite of the mother being on a wheel chair. They seemed to have been cared for nicely by the personnel there. The father sometimes kid himself saying that they are in a human zoo. Since both of them will reach their 90s very soon, it might be a good place to spend their senior days.

My wife has brought a few CDs of old songs to the father. She explained about them to him. 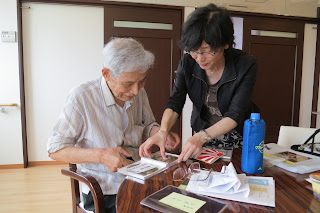 My wife served yogurt to mother. 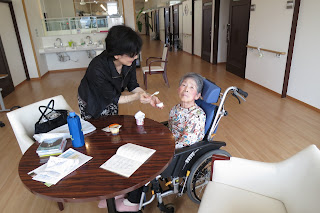 We have had a nice dinner at a restaurant on the 20th floor of the hotel, where we could have a great command of view over the ocean. 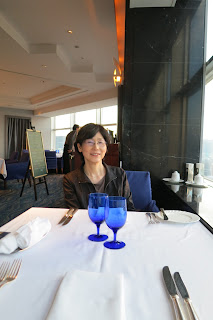 At the sunset from the restaurant. 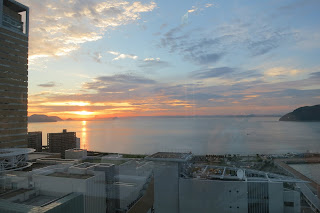 The day after, that is, yesterday, we have brought the father for a regular check up to a med school hospital. It was fairly big one. He has had some kind of infection which has been treated per oral antibiotics. We were concerned about the exam since the lab data has not been normalized for a few weeks. But the exam has revealed only mild liver dysfunction due to the antibiotics. The doctor on charge kindly explained the exam result in that way. Of course, it has made us all relieved a lot.
I have rarely been to such a hospital as a patient or a patient's family. The doctor who took care of the father was a young one. Very kind and eager to let him understand of his condition. There were young staff walking vividly on the corridor etc there. They looked kind of dazzling to me. I felt it had been only a few years ago when I was working hard like them at a med school hospital. Now the time is over. I am on the side of patient. No wonder, we are getting nearer to the age that needs to be cared for like the parents in law. We should be ready for that soon. 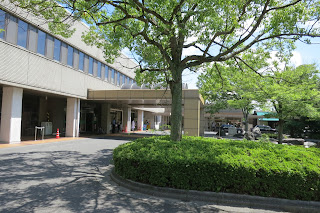