The 9th anniversary of my father's death

It is the 9the anniversary of my father's death. The time has passed quickly.
My father used to be born at a pretty wealthy family. In sometime, however, he has lost his parents due to tuberculosis in a short interval. He has not had a chance to educate himself but was forced to be involved in the war soon. The age of war has compelled him to spend his precious young days in the army. He has experienced a hell in China. It was a background why he had had a firm belief in pacifism.
When coming back homeland, he was caught by Christianity. He joined the tuberculosis sanatorium managed by my aunt, where he has married with my mother. As the sanatorium was closed, he brought his young family to Tokyo, where he has had a job as a housekeeper at a hospital. Maybe, I am too lenient to him but could say he has worked very hard. He was very eager to give his children chances for education. He has not complained of me at all when I wanted to go to med school after finishing mechanical engineering at a college. It was surely an economical burden to him and my mother those days. My brother also had professional education as a psychiatrist while my sister became a nurse.
In his retirement, he has spent peaceful years here in this countryside with us. He has cared for our children so affectionately. Without him and my mother, I believe we could never have worked  as doctors.
Describing his life in this way, I might mislead the readers that he could have been a man of character. It is not a reality. He has had many problems in his character and behaviour, I know. But I know he has struggled for life, truth and family as much as possible in his own way.
The epitaph says God is guarding us as a quotation from a Psalm in the Bible.
I still miss him. 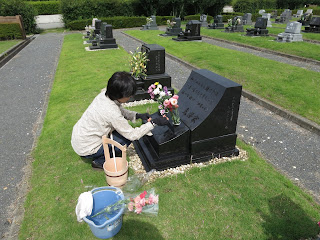