Last night, as ususal, I had a nice chat with Steve N6TT. When he called me on 40m, he surely sounded fine and in great shape. His CW sounded like a superman flying from over the buildings. Fast and steady with the spaces between words being just right and having to be in that way. No errors at all. I knew he had had good sleep before he mentioned about that. He often has had a problem of insomnia, as he said. As I expected, he told me he had taken good rest the day before.

Steve and Jim W6YA in Steve's shack. Before his collection of keys. 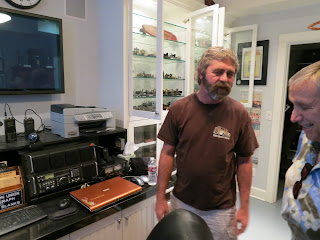 CW sending is deteremined by many factors like the set up, the keyer and the key etc. These are always constant and not varying from day to day. But health condition or amount of sleep clearly makes up the quality of sending CW as well. If the operator has had good sleep and in good health, sending could be so smooth and reflects directly the sender's ability. It is changeable from day to day.

I sadly remember the last days of Steve Eichman WA6IVN, who has had a malignant lymphoma since his young days. We often talked in 1980s when I came back on the radio. He sounded to fill his life with as many things valuable as possible. Boating, hiking and ham radio. It seemed as if he had hurried up living his life. Both contesting and DXing have occupied his mind at first. But later, when he had got another cancer and has gradually lost his physical strength, he seemed to enjoy chatting on CW.  We routinely chatted on 40m CW those days. In sometime, as his condition deteriorated, he became inactive. In 1991, just before my 3rd trip to the Bay area, he has given me a call after some interval. His fist was not like before. Sluggish, staggering with improper and inconsistent spaces between words. I realized how he felt as soon as I heard him calling my call sign. I was so sad to hear him in that way. I could not remeber what we talked at that time. But his fist at that time still remains in my memory.

So, so far as we could enjoy the vivid and pleasant CW, we should do that. I would enjoy each QSO with friends like Steve N6TT all the time. We could tell our health and mental conditions from keying. We should be more aware of that. And  we should be considerate and gentle for the other people, I believe.  It is what I tell to myself.
Posted by Shin JA1NUT at 12:12 PM