A trip to Shikoku

I and my wife have visited my wife's parents, that is, the parents in law for me, on Sunday through Monday. Since both of them are older than mid 80s and mother in law is suffering from Alzheimers now, they have decided to enter a nursing home in Shikoku recently. I haven't visited them for several years now. I sure owe them a lot.

It was a fancy building that the facility is located in. A new care facility for elderly people. The facility is equipped with fancy furnitures and gorgeous lights on the ceil. The private rooms were not too small with a bed and least numbers of furnitures necessary for daily life. It didn't smell anything of the active normal life, though. Fortunately, the all staff looked cheerful and kind. For father in law, like the other care recipients in the facility, it is not allowed to go out without any accomapnying person. He did not mention of that but must felt it a bit of strain to himself. 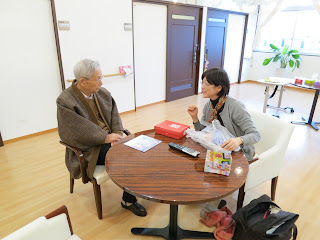 Mother in law has had a fracture of femur head and could hardly converse with anybody. My wife told she had nodded to her when my wife greeted to her. She uttered a few syllables of thanks, as wife said, and finally teared a bit. In a few minutes, she seemed to be so tired that she fell asleep again. She, together with father in law, had worked hard as an officer at a local governmental office as well as a house wife for over 40 years. They have raised two daughters. As soon as she retired, her mother, that is, my wife's grandmother has needed care for daily routine. Mother in law has served and cared for her for about 10 years until grandmother passed away. It won't take only a few years when she could enjoy things for herself like travelling, making dolls and careing for flowers in the garden etc before she  developed dementia. She used to be a sharp person who planned and executed anything by herself for every family member. She was quietly lying on the bed at present without anything reminding us of her several years ago. It seemed to me she was living the present time, not for herself, but for the family members who should say farewell to her. I could hardly think of anybody like her who had lived for the other people throughout her/his life.

Yesterday, we, father in law, my wife's sister and her son, my wife and me, have taken a nice lunch at a restaurant. We headed back home thereafter. I would return there oftener. Aging is not the others' problem but is own for sure.

It was stormy last night. Most of the gingko tree has had leaves fallen on the ground. 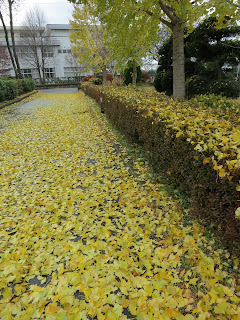