In the warm sunshine

We have a small house behind ours in the same property, where my parents used to live. It is a humble house in japanese style with low ceilings. Yesterday, it was so sunny that I ventilated the rooms opening the windows. Everything remained at the same place as it used to be when our parents lived there. When I was in a room there, I was caught by an illusion that parents had been standing at the corridor. They were wearing the same casual jacket and smiling at me from behind. The same appearance of the room may make that illusion on me.

I recalled how long it has gone since they passed away. 8 years since my father gone, while only a year and a half since mother left. The length of the time is only a blink when looked back, while it is eternal in the prospective view. I am not sure if I could see them at "that time". It is for a second as well as an eternity for me. All I could do is to go on live my life recalling of them as good old being for me.

Standing still there for a while, I was thinking as described here.

This photo was taken one month ago, when I had their matresses sunbathed on the velanda of their house. My father used to do this when he was well. I sometimes find myself doing the same thing now and could not help smiling at me. 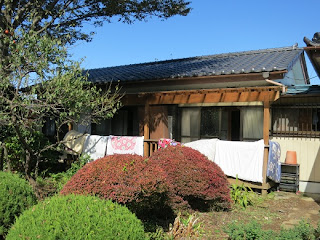