It won't take too long before spring comes

Yesterday, it has been snowy for a few hours. A bit wet and heavy snow has covered the ground. It has melted away on the sunny side today. It still goes on being cold today.

You may see the small flakes of snow falling obliquely on the left side of this photo. Such snowfall is rarely seen in this area. The 2nd time this season so far as I remember. 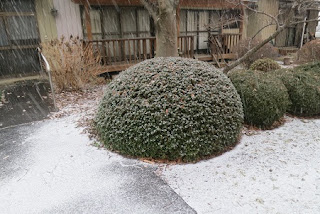 Even though it is not a pleasant news, I knew recently a friend of mine, a younger doctor, had suffered from severe autoimmune disease since last summer. His new year's greeting card has told me that.

I have given him a phone call. He told me, in a morning last summer, it was difficult for him even to get up due to severe arthralgia on limbs. It has assaulted him all of sudden. Actually, he had known of the illness, with an prior accidental lab exam, in subclinical condition a few months before it developed overt. Despite of being in such a condition, he was still working at the hospital. He has good knowledge of the illness, natural course, treatment choices and complications due to the illness as well as to the treatment. He let me know of that as if he explained to one of his patients with the same illness. Quite serene and objective attitude as for the issue. Sometimes even chuckling himself. Who knows what conflicts he has had in his mind? Thorough knowledge of the disease calms him down? No, I can't approve that idea. Being a doctor may make us more perplexed than the non medical people since we could know exactly what happened to us and should decide the ultimate decision for the choice of the treatments by ourselves. I only hope some new medicine will lead him to remission and to enjoy retirement in several years. A medicine of the biological genre he started to take several weeks ago seemed to have achieved some good effect on him as he reported to me. I wished it would benefit him further.

I should also get ready for such a thing in my life. May my mind maintain serenity and quietness in the future whatever may happen to me.

I found japanese apricots' flowers were budding now. It won't be too long before they come out fully. 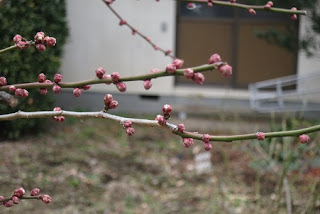