A friend electrician has retired

We have had a trouble with an air conditioner at our daughter's room. She seldom visits us and stays there. But it is not comfortable for her to stay there in this severe weather in winter. I have called a guy with the initial of YK who owned an electrical appliance store and worked as an electrician. As written below, we and our parents have been close each other for long time. I have asked him for any repair of electrical appliances and for new items both at home and at my office. He has always been so quick to answer to my requests. He used to work with his friendly smile for us.

His parents knew my parents at the tuberculosis sanatorium my aunt used to manage here at this place back in '40s to '50s. His mother has been so kind to my mother whom she has visited for many times even since my mother suffered from dementia. I used to bring them to a hot spa near by years ago. A gentle and kind lady indeed.

On the phone, I was surprised to hear he had closed his shop last year owing to a health issue. All of sudden, he, 2 years older than me, has got AV block in heart which caused severe bradycardia. It urged him to be hospitalized and to have pace maker implanted. With that device, he could do anything but his job as an electrician. An electric shock may have the pace maker act up and result in an ominous condition, as his doctor said to him. That was the reason why he decided to retire last year.

His mother in law, over 90 years old, needed supports by him and his wife. That is why he has moved to the mother in law's home pretty close to his original home. He told me he had been growing many kinds of vegetables. I have visited him at his old home yesterday, where his daughter told me he had moved as written above. He has visited me this morning bringing some vegetables he has harvested. 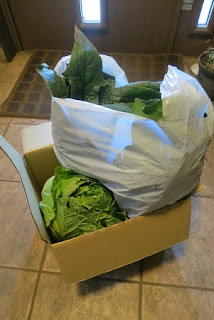 Our parents have lived in this area as good friends decades ago. Except for his mother, all have gone away by now. And it is the time for both of us, YK and myself, to live in retirement now. Time is passing steadily and fast.

Telling me he would live for only another 10 years from now, he has left here. If we have the foods and the home here, we could get through our retirement even in economical recession as expected very soon. I have replied to him.

May he be blessed with good health and enjoy his retirement!
Posted by Shin JA1NUT at 12:08 PM