Visiting a hot spa nearby

It was the day when the gardener came to our home and did his job for us. It was overcast and sometimes drizzly. I won't do gardening with him and decided to go for hot spa. I have never gone such a place for months.

With the GPS on the car, I found a hot spa in Yasato, which was located on the foothill of a mountain range south east of here. It was 20 or 30 miles from our home in direct distance. On the way there, I drove through a small mountain range. The cedar trees grew thick. Being only a few hundred meters above sea level, it might be pretty muggy there. The foothill spreading on the southeastern side of the range had a lot of orchards. Some of them were for tourists who would enjoy picking fresh fruits up. Since it was off season, there were very few people visiting there, if not at all.

When I started residency at a med school hospital and took the driver's licence near here, I could not purchase a car for myself. The salary was surprisingly low. My father took me to his brother, that is, my uncle, who kindly told me to give his used car. On the way there, I drove this way to his home. I remembered of that drive clearly. What have we talked about? I was concerned about only own future. I am afraid I have concerned least about him or uncle. What has my father thought about me then? Time has passed.

There used to be a patient and her mother attending to my office on regular basis for some time. She has had some kind of school refusal. Her mother was dominating her. It was an illness of the mother but not of the daughter. I was wondering how they had been doing. The daughter should be around mid twenties of her age by now. Has she grown up and started own life? What could I help her at that time?

It took me an hour or so to drive there. In this area, if digged out anywhere, there would be spa found, they say. Our land is the land of volcano and hot spa. In '80s, the government foolishly has subsidized cohesive money to each local government all over our country. It was a pretext to stimulate domestic demand. It was, if I remember it right, due to the request by the US government at one of the Japan US Impediments Initiatives. Our government should have prepared for the aging society we are right now in. The local governments have been puzzled how to spend that big budget. Some of them have constructed such a hot spa as this one. Having written up this way, I looked up how this hot spa was started. They say it was 16 years ago when it started in the web site.  This facility could be built by some private company but could be sold from the local government as well.

It was a beautiful flat place on a foot hill surrounded with farms and orchards. On the horizon to the west, a range of mountains was running from north to south, even though it was not very high as told above. Flowers were planted at a corner of the hot spa. 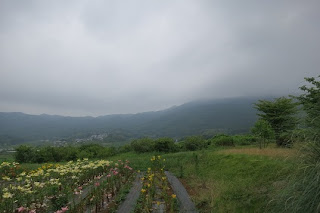 Only a dozen of people were there. No wonder it was the daytime on a plain week day. 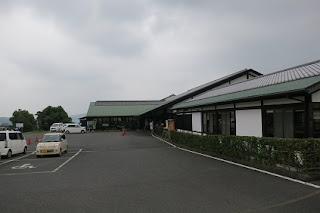 The tub was large. There were various forms of bathes including the outdoor one. Dipping in that large indoor one for some 15 minutes or so, I got it out. On the way back home, I came to a Sushi bar in the city where I used to work. A very nice treat to me. But if I go on this kind of life, I might get some serious illness of old people soon. With a souvenir to the gardener, I headed to home.
Posted by Shin JA1NUT at 10:42 AM