How I am getting along lately

Boy, it has been 9 days since I updated this blog last time. I am still doing fine and spending pretty busy days with hamming, gardening, playing cello and cooking etc.

Most striking thing in my life recently is a book regarding the relationship between Japan and the US. When our constitution was enacted after WWII, they have hypothesized the presence of the UN Force under the UN Security Council in function. But with the cold war and the war in Korea starting, the spirit of the constitution has metamorphosed to the present contradiction between the original pacifism and the presence of the US military/JSDF in Japan. Our country is under the war state under occupation. This contradiction should be resolved by some  means in the near future. We should resolve the problem of the responsibility of WWII by ourselves as well.

In ham radio, I am still enjoying pleasant chats with friends. Last night, 20m was pretty good for NA. I have met Andy K2LE after some interval. Actually, we scarcely have had conversational QSOs for years. He has been always active only in contests from the station in VT away from home and as P40LE. He was really excited to operate the big station in VT with remote control. He has thanked to Gerry W1VE and the group who have done with the soft ware for remote control. He has had a vertical at home in NY, which has not worked well with much local QRN. Like Ellen W1YL, he is enjoying the cutting edge technology for remote control operation. I could understand what he was feeling. Hopefully, I could make chats with him much more than ever.

Summer VE5SDH has given me a call with her beautiful fist. Bug key should not necessarily sound like a keyer. Her bug sounded like an electronic keyer in the beginning, so that I even asked her if she had changed the key from her Vibroplex to a keyer. It was her old bug key. Stunningly neat and beautiful. It was a sad news that her guide dog, Lake, had turned out to have cancer not treatable. It means she would lose her guide not so far from now. It seems it takes her a year or longer to have another guide dog. She must go through a hard time parting her loving dog and having to spend with a cane for some time in the very near future. I only hoped she could undergo this hard time in her life.

This week end, our daughter is coming home. It has been several months since her last visit here. What a joy! She told us to go for a performance of British Royal Ballet in Tokyo. I am not very good at such concrete type of art. My wife would go for that with her in stead. We may have a nice lunch together somewhere in the downtown of Tokyo on Sunday.

Tomatoes in the garden are getting ripe. 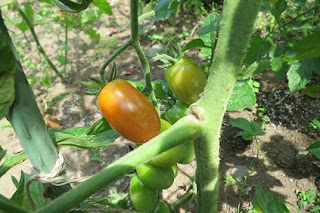 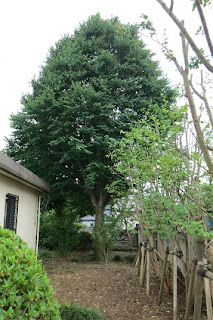 We have asked a gardener to care for our garden. I have mentioned about him in the previous post. A really great person with love for his profession and capability in it. The back yerd, which looked like jungle, has been cleaned and trimmed beautifully as the photo shows.

It has passed the summer solstice. We might have the better condition on the air in a month or two. My ham radio friends, let's make nice chats as if our lives were interlaced each other.