It was in late '80s when I often worked Joe Y62QH, later DL2HQH and presently DL4CF. It had been 2 or 3 years before the iron curtain between West and East Germany was pulled apart. As with the other old communism countries, most hams in East Germany used to make only rubber stamps those days. Joe was a bit different from them. Possibly being young, possibly in his late teen age at that time, and brave, he often talked to me something other than that stereotypical QSO. I haven't asked about that to him yet. The censorship of ham radio might be loosened since the communist hegemony was being lost over there. Anyway, this young guy in East Germany was remarkable with his freedom in operation as well as his great fist.

A few years later than I did, he joined FOC. We have talked even oftener at that time. As soon as the two Germanys were merged, he told me he would visit the US. I was surprised to hear that because it might not be very easy for him to travel abroad at that time. He would, however, go out of the country and see things in the western countries as soon as it became possible, I believe. I have introduced him a good friend of mine, Bob, W6CYX in San Jose. Joe has visited him and stayed there for a week, if I remember it right. Bob is located on a foot hill of Mt. Hamilton overlooking the entire Bay. I am sure they have become good friends.

Bob and his wife Mariko have visited Joe in 2 or 3 years since Joe's visit to the US. I can't remember who has sent this photo to me. It was taken at Joe's shack. 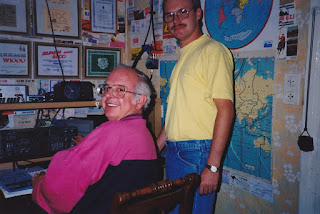 In winter, late at night in our time, 40 meters opens to both NA and Eu at the same time. I have had a big round table with both of them over the north/south pole for a few times. I guess Bob and Joe were through the long path at that time. It could never be a lengthy leisurely chat. It was, however, a big thrill for me to listen to both of them at the same time. Even though it was tricky for Joe and me what direction we should beam to.

This morning, 20 meters was fascinatingly opened to Eu. An hour later than sunrise, Joe has given me a call with usual big punchy signal here. His call was not hit with my PC log which I had started using 3 years ago. It has been, at least, 4 years since we talked last time. For the past several years, he seemed to have been busy at work, which had prevented him operating radio too much. He seemed to ride, not motor bike like before, but bicycle now. He said it took 45 minutes one way from home to office on the bicycle. We have rumored about Bob as well. Joe told me he had not heard Bob for a while. I told him neither did I. He used to tell me he had been just listening the bands but won't call the stations he heard. When 40 meters starts to open between NA and Eu via long path, he could not resist giving us a call and we might make another big round table then.