It is a small world.

It is getting humid and warm even in the morning here. It is a bit difficult for me to sleep again once waking up early in the morning. It was 4 AM when I woke up this morning. Having a cup of coffee with hand, I came into the shack. Twenty meters was exceptionally good for the western Europe. Among old friends like Kjell SMOCCE, Harry DK2GZ or Knut DK5AD, Georg DK7LX has given me a call.

I have heard of his trip to Ark. in the US from Ron K5XK. Actually, I was talking to Ron on 15meters CW while Georg was staying at his home. Ron told me an interesting story. When Ron peeped Georg talking to his wife, Sabine, in Germany through the Skype in the shack, as Ron said, she was  crying at Georg there. Though she wanted to come with Georg, her new work had prevented her from doing so. She was so sad not to be able to be with him. What a hot couple! She had been relieved to have Georg come home 3 days ago as Georg told me.

Georg was happy and honored to be an FOC member. He was celebrating becoming a member with Sabine at a restaurant last month:Georg has sent me this photo together with another photo of Rudi DK7PE shown later after the QSO. Georg has the membership paper with his hand. 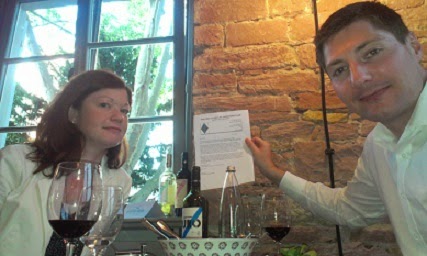 Georg's page of QRZ.com tells he has been pretty active in DXpedition. Maybe, his work at an airline company has made it possible. He is only 42 years old and could be a great advocate for CW to the young hams. His DX activity has reminded me of Rudi DK7PE, another avid DXpeditioner with whom I used to work around 1990s. I asked him, expecting a negative answer, if he had known Rudi. Surprisingly, he knew Rudi very well. Rudi has been a colleague at the company. Georg told me excitedly that he had just talked him a couple of days ago.
I told Georg how I had known Rudi. He has been a proficient CW operator and was not only a DX crazy. He often enjoyed chatting on this mode. Once, Rudi told me a funny story. When he visited Rev. Moran 9N1MM in Nepal, he had to repair the gear by himself staying up until late at night. The day after, very early in the morning, he was forced to get up and was told to attend the morning service. That was why he had been reluctant to stay at ham friends' home since then. I have enjoyed his operation so excellent that very few could compete with him. Whenever I heard of his DXpedition those days, I assured myself that I could get him at that rare one before he actually came on. His technique in operation was that much superb.
Georg told me he would see Rudi in a couple of days and looked forward to seeing what reaction Rudi would show when talking this story to him. Here is the shot of recent Rudi operating from 9X land. He is now 55 years of age. But he still looks very young. After the QSO with Georg, I remembered I had found his name and call in the visitors' note book at K6DC in Santa Barbara immediately before me when I visited Merle there in '80s. It is still a small world. 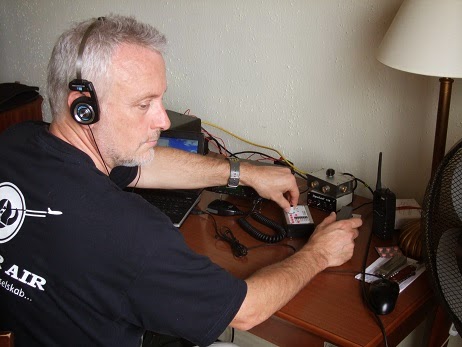 Georg told me he has been interested in our country and would visit here in the near future. I would talk with him over glasses of beer then. Of course, together with Sabine that time.
Posted by Shin JA1NUT at 11:01 PM