Centuries ago, people have started pilgrimage around Shikoku. It was, they say, after a great teacher in Bhuddism named Kukai who had lived in ascetic discipline in Shikoku district in the 8th century. Pilgrims go around Shikoku worshipping 88 of the temples scattered all over.
In the beginning of its history, they say, pilgrims were those who could not live in the homeland due to various reasons, mostly ominous or criminal, or those with serious illnesses. They prayed for their relieves through the pilgrimage. Or they could not live in the other ways than this pilgrimage. Having been supported by people along the roads of pilgrimage, they have walked all the way on their feet. Doing charity for those pilgrims with giving foods, water or even accommodations has been believed  to mean doing something good in Bhuddism.
At present, a number of people, young or old, are still going for this journey. They say most of the modern pilgrims want to know who they themselves are or would regain the power to live after having got tired from their own lives. A part of them still walk all the way on their feet as in old ages. It takes them longer than 2 months to walk through the entire pilgrimage for nearly 700 or 800 miles.
People along the roads are told to be still very helpful to those pilgrims.
The pilgrims wear white cloth with a wooden stick on a hand and a straw made hat on head. It was until I had heard about it from a taxi driver in Takamatsu city, one of the largest cities in Shikoku a few years ago, when I knew their dress meant they could die anywhere on the way of pilgrimage. I was almost shocked to hear that there had actually been many pilgrims lost theri lives on the way. The white cloth was for the funeral for themselves. It was not for fun but for a real discipline to look for the reality in life.
Recently, I have read a book about this pilgrimage written by a retired journalist. He used to walk all the way in his forties one time. It was for writing an article as a journalist. He said he wanted to walk for pilgrimage itself apart from his profession. He made it true at the age of 70 after retirement. He has described how it moved him through walking in the nature and meeting people on the way. It's a pity, as he said, some roads have been paved and have had much traffic with cars. It has ruined some parts of the pilgrimage. But, in the other portions, the great nature was still preserved and has reminded him of the ancient pilgrims who had walked the same way. He has also described a lot of impressive chance meeting with many people, Bhuddism priests, pilgrims and people doing charity for him.
Giving every routine in my life aside, I would like to go for this journey by myself in the future, not far from now. It might be a good chance to reflect myself and to consider how to live the time left in my life.
This photo was taken on a beach in Shikoku, near to my wife's homeland, in this winter. There was a temple for this pilgrimage close to this place. 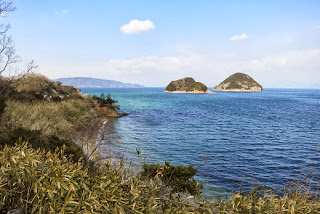