Last night, I have been to a concert of the university orchestra I used to belong in the med school days. It was held in Kawasaki in Kaganawa Pref. The same hall as I went to listen to them in Nov 2013. It took me 2.5 hours to go there door to door.

It has been a joint orchestra of two universities since its beginning. Everything has, of course, changed since the days I was in it. Only the same bassoonist still remains as a trainer. There have been a number of different conductors taking the baton of the orchestra since our days. Yoshitomo Kawachi, the conductor, used to be a young and hopeful one in our days. The only thing unchanged is the ardent enthusiasm of the young people as players in the orchestra. 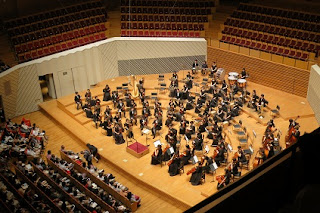 The seats behind the orchestra were not used. The front seats were all full. I had got the hall 10 minutes before the concert started. But I had to go up to the 4th floor for a seat.

I was overwhelmed at the gorgeous dynamic sounds of the orchestra again. The contrabass and the brass have roared as if from the base of the ground. The woodwind instruments were all lovely and beautiful. The other string instruments were well trained and accurate. The step wise floor of the performers might be of help for them to see the conductor. The Einsatz was excellent. There were a few mistakes such as imperfect attacks of some wind instruments. Overall performance was really impressive for a universities' orchestra.

I was interested in the cello soloist, Y. Kigoshi. Honestly speaking, this concerto seemed overburdened to him at his age, I am afraid. He used to be a promising young cellist when I started cello. I have ever listened to a master class he played the very same piece. I can't remember who has taught him then. He has long taken the seat of top cellist at NHK Symphony Orchestra, one of the most famous orchestras in Japan. Having retired that position, he seems to teach cello to students at a music university. Even for such a performer, this concerto seems a tough one. He played Saraband of Nr2 Unaccompanied Suite by Bach as an encore. It was really excellent. His Stradivarius has spun a tune of deep emotion in a very natural way. It was worth attending to this concert only to listen to this piece. The program said he had loved the Unaccompanied Suites so much that he had been performing them as his life work.

Considering of the nature of university orchestra, I must admit almost all members are exchanged in 2 or 3 years. The concert master/mistress or the part leaders may take their part only for a year or two. They are devoted to this performance as if they were inflaming themselves at that moment.