A trip to Tokyo

I have been to Tokyo yesterday. I was going to attend an ensemble class in a downtown named Shibuya. Though it is a famous place in Tokyo, I have never got off the station of Shibuya for decades. The outlook was quite different from what I had known of the town. There were a lot of new buildings. Construction around the station was also going on. I was totally lost by the drastic change of the town. When I told them about being lost on cell phone, a person in the class has kindly come to bring me up to the place. He might have taken me for an old fellow from countryside being lost. It was not really far from it, I must admit. 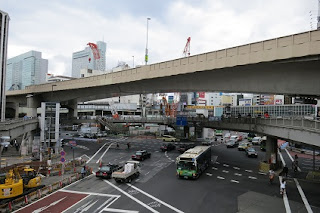 Having been lost on the way, I could not take lunch before the class. And the program of the class was different from what I had heard of. The other string quartet of Haydn was practiced there. It meant I had to play it at first sight. Even pretty simple quartet by Haydn was a terrible torture for me to play at first sight. All of these made me deadly tired even though the class itself a young violinist had taught was stimulating and informative to me.

Almost falling asleep on the train back home, I was wondering if I could go on coming to Tokyo for ensemble or orchestra from now. It reminded me of a memory that my father used to attend to a bible class held in Tokyo once a few months. He used to attend it every Sunday when he lived in Tokyo. But, owing to the distance from Tokyo and to his age, he could not go there in that way any longer. Wasn't it the same as my trip to Tokyo for music activity. He was always looking forward to going there. It seemed he had literally revived after attending to the class. Seeing old friends must be a factor why he had become vivid that way. Whatever the reason might be, he was really lively and refreshed after the trip to Tokyo. I might look a bit vivid after this trip, as my wife told some time ago, even if I felt physically very tired.

Maybe, I would return to Tokyo for another music activity. But I wonder how long I could do that.

I got fallen asleep on a couch before TV and woke up this late again.
Posted by Shin JA1NUT at 1:46 AM