Modification of 80m sloper for 30m

Last night, when I complained of a lot of contrests occupying almost every week end to Jim W0CML on 40m, he told me to get on 30m. So did Bob W6CYX in the past. I was reluctant to make an antenna for 30m and thought I would do something else while the bands are busy with contests. Jim persuaded me, however, to be on 30m. I have made up my mind to adjust the 80m sloper for 30m.

The 80m sloper could work as the 3rd harmonic for 30m as you know. But it is resonant too high for 30m. Addition of 80 or 100cm of element at the end was supposed to work out for 30m. I haven't examined the antenna for years. The outer sheath of the element was almost decayed. No wonder it has deteriorated in that way since it was kept as it is for almost 25 years. It is astonishing the element has not cut yet.

Anyway, I was not so eager to exchange the element by myself. Bringing out the solder iron beneath the element, I connected that additional wire to the element. Later, having turned out too short for the adjustment, it got SWR about 1.7 on the mid portion of 30m. Maybe, I could run with it. Opposing to my intention, SWR reads much better on CW band of 80m. Let it go as it is.

In the daytime, I could hear a few JAs on 30m. But they seemed so called JCC/JCG chasers. I worked a few of them. The antenna seemed to work well. The only problem is if there are anyone who enjoys ragchewing. I would make debut on 30m this week end after a long absence. 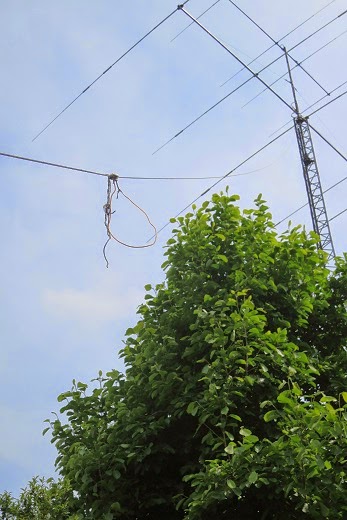