It was so warm a few days ago that I went out to pull the weeds in the garden. The breeze was tender to me. I was apt to have back pain leaning forward while gardening. It was still a fun. Touching soil reminds me of something essential to living.

In some time, I would have a cup of tea in the house. I went to the entrance and tried to open the door there. It was locked. It would never open it. I looked around for any door or windows where I could come in the house. All in vain. My wife in a day off seemed to go out locking the door. I was  left alone outside. I had been afraid this might happen someday. It has finally happened to me.

I didn't have cell phone to get in touch with her. In a minute or two, I have given it up. I entered to the other house in the same property, where our parents had spent their last years. Despite of no power there, everything was kept in the same way as my parents lived there. I filled a cup with tapped water. There was a comfortable chair in a small hall, where my mother used to spend afternoon. Sun was shining in there. Everything was ready for me to spend the afternoon there. One more thing I needed. I would spend time reading some book in the book shelf. A variety of books were in the shelves. An essay written by an actor. Or one of the writings by S. Takahashi whom my father used to be devoted to. A diary of my fathers' has caught my eye.

It has been nearly 10 years since my father died. But I would not read his dairies by myself. My father used to be a keen dairy keeper for decades. Reading them might mean to me that I would invade his inner world. I hesitated to do so reading any of them even though he had passed away.

Simple description of daily life there. Just like notes to memorize what has happened. Surprisingly, he has written down of us, his three children, quite often. Most of his diary was occupied with such topics. It attracted my attention that he had written more of me than the other borther and sister. For example, he wrote that even though I would have exams at school from tomorrow, I had gone to Akihabara for radio parts. I don't remember to be told to study more for school by him. But he must be concerned about me in various ways. It was when I was in the term of rebellion in my life. Was it the reason why he had cared for me so much?

Since I have raised children by myself, I thoroughly understand what he has felt about us at that time. I asked myself if I had understood him in his late years. His hope and sorrow. I still realized that I had got away from him when he needed my concern and help. It is too late. Does father-son relationship always go in this way? It won't excuse me at all. Reading his description of me in his diary, however, I felt I had grown up under his concern and affection. If he were still alive and knew I had realized this, he might tell me "It is OK. It is your turn." 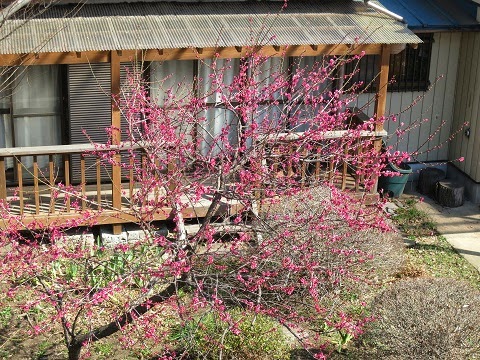 The red ume flowers are in full bloom.
Just in front of the house I spent that afternoon.
Posted by Shin JA1NUT at 12:26 PM