This spring, we have had cold waves in regular interval for several times. An unusually cool spring. It has made the farmers around here do planting rice rather late. A neighbor farmer next to us in the northern way started watering into the rice paddy there. 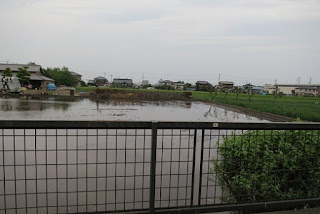 We used to be surrounded with rice paddies, watered, all around here at this time in a year. But, only this farmer grows it at present. This photo shows the watered rice paddy over the fence looking due north.
As you see, a piece of farm is not so large as that in the US etc. Farmers are always working at some job other than farming on the plain week days while they work in their farms in the week ends. The size of farms remain pretty small. Our government has tried to proceed intensive agriculture in our country. They believed that it would be the only way to change our farming industry to that competitive to those in the other parts of the world.  However, that projects have been in failure. Farming won't follow the rule of modern economics, as they say. Because it is impossible to move of the production means, that is, the land, and the people themselves. farming products are closely related with our existence itself as well. The modern economics ﻿won't be able to be applied to such an industry as farming. The same exception is medical services. It is directly related with our lives, which we won't obey the rule of modern economics.
Our government told they would place both farming and medical science/services as the main tactics to produce further growth of our economy in the TPP era.  Is it really possible? And will it make us happier than now? I still doubt it.
So far, all I could do is to enjoy a bit better take off of my signal with this watered rice paddy.
Posted by Shin JA1NUT at 10:16 AM