It was when I came back on the air at the dorm of a med school hospital that I met Tim with this call for the first time. My old log book told me we had met in '60s when he was VK3AZY as well. Anyway, both Tim and I were so active in '80s that we often worked on 40m. He was always on the way back home in Mt. Eliza from his office in Melbourne. There must be many CW operators around the world who have worked him, either at home or on mobile. He was running a mobile from his old Mazda van those days. His old FT101E sounded a littli bit chirpy. That chirp was unique enough to let us recognize him without hearing his call. What a charming signal he used to send out from that set up!

I have found the old photos of him and his mobile set up when I was tidying up the old stuff in the storage room a few days ago. Here are those photos he used to send me in '80s.

This is Tim in his young days. He has been a person of good will to the others. A bit shy but very sociable once he knew someone. I believe these photos were taken in Canberra when he spent the holidays there. This is his old Mazda with a home brew whip on the roof. 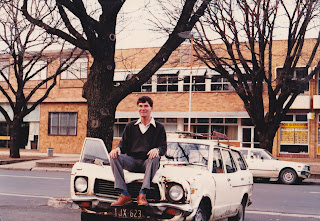 He used to operate radio in this way. His old FT101E was on the side seat. The paddle was beneath his thigh. He was very fluent with chatting on CW. We often chatted all the way where he drove from Melbourne to his home for an hour or so.  He used to ask me to wait for him until he bought his FT101E into his shack. With a glass of vermouth, he often came up on the band from his shack in a few minutes. We have talked for some more time thereafter. I wonder what we have had to talk about after an hour QSO from his mobile. 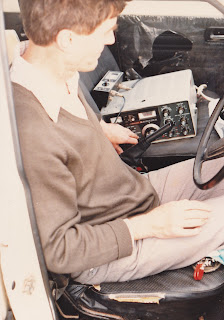 ﻿
His home brew whip was on the top of the van. It had a top hat and a big sized loading coil for each band. This antenna was so efficient that he used to tell me he had worked Eu through long path on 80m. A friend of mine, VK1ARA, let me know he used to bring a blanket and a refrigerator on this van  ﻿so that he could stay anywhere he wanted. 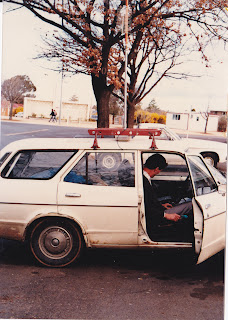 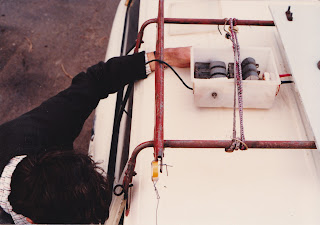 The top loaded whip on the roof of the van. The size of the coil must made the antenna so efficient. 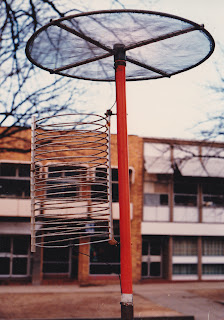 ﻿
Tim has been, unfortunately, bed ridden at home for a few years. Drew VK3XU, one of his friends, used to give me updates of Tim from time to time. I haven't heard from Drew for a year or two. Tim is already over 70 years old now. I hope he is getting better and is coming back on the air soon. I surely miss him with a great fist.
Posted by Shin JA1NUT at 6:17 PM