It has been incessantly snowing since early this morning. Wet and heavy snow. A very quiet afternoon . I have had a number of good QSOs in the morning. The bands have been widely open to the US. Among them, Bob N2UU was one of the most impressive one to me. He has retired 1.5 years ago. But he would like to do something worth doing again and returned to his work recently. It was not for the income. Nine hour long duty turned out to be a little bit tiring to him, though. He has shortened the work load a little bit now. Though I don't think I would back to a full time duty like he does any longer, I feel the same way with him. There should be many more retirees with the same feeling for work.
From the window of the shack. Everything is covered with snow. Some wind is blowing from north. Large flakes of snow are flying almost horizontally. It is the first snowfall here this winter.    ﻿
﻿ 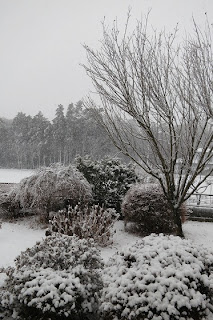 The antenna elements got much icy snow, I guess. The SWR reads very high even with 28MHz monobander. The radio has been turned off now.  I have been going on tidying up the storage room in the shed. From now, it is the time for music. Listening to some chamber musics and playing cello. Snowfall is not bad at all. I only hope the antenna elements won't be bent with the heavy snow.﻿
﻿ 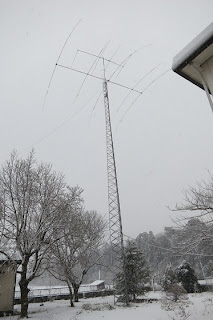