A trip to Nagano 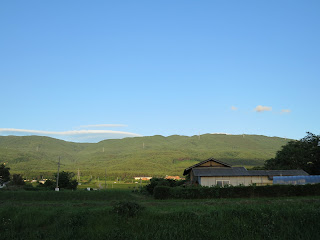 I have been to Nagano on my car in the latter half of today. A lady, my cousin's sister in law, has died a couple of days ago.  It was the last chance for me to say good by to her. She has been born, grown up and worked as a farmer at the same place. Not married. But she has spent a quiet life with her brother and his family. The photo shows her home and the hills on the background, which I took late this afternoon. A serene and calm countryside.

I have known her since my med school days. In summer thosedays, I used to visit her place on the way to or from camps of the university orchestra, which had been held near to their home. She welcomed me with warm and quiet smile. She won't speak so much but was always warm hearted to anyone around her. Her family members have loved her as well. She lived in a belief in Christianity.

She had a fracture on her femoral head 6 years ago. It limited her activity so much. Later, she had cerebral vascular problem, which made her bed ridden. I regret that I have never seen her for several years. Despite of having gastrostomy, she gradually went on a downhill course. She finished her trip on the earth at the age of 98 years. Her face looked so peaceful. She must have wanted to come home shown above, I believe. Now she might be everywhere she wants to. Rest in peace, my aunt K.