Spring at an old tomb 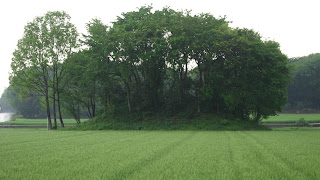 The old tomb, of which I have uploaded a photo in the past, is welcoming arrival of spring among the watered rice paddies. This could be built to bury some man of power in this area in 7 or 8th century.

In that period, our ancestors used to accept Buddhism from China. There seemed to be no conflicts between the new religion and the primitive one the people had believed in for centuries. Rather, the people placed Buddhism in pararell to the other primitive religions. They intended to utilize religions only for guarding the country those days, as a historian told. It had taken some more time before they did  with the problem of individual salvation through enlightenment even though there used to be a budding of realization in value of religion in such as , a great statesman, Shotokutaishi.

Whenever I get through this place, I could not help imagining of those ancient people. They might look at this tomb with some primitive but spiritual feeling as I do at present.
Posted by Shin JA1NUT at 4:13 PM