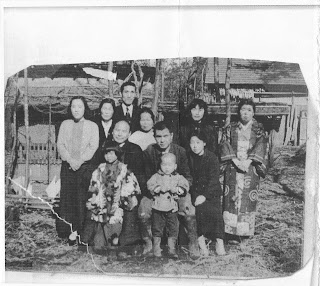 I will add a year to my age in a couple of days. It is a crisp and cool season. It could be stormy sometimes this year. But I am still pleased and thankful that my parents have given me birth at this time in a year 63 years ago.

My sister has sent me a birthday card with a copy of this old picture. She said that this was taken at the sanatorium my parents worked for in about 1953. It was a small and poor facility which was run by our aunt. She was a faithful christian and used to work for the tuberculotic patients whose illness was always destined to death those days. My parents knew each other and were married there. I scarcely have clear memories of the life there. This photo shows a poor house on the background. There seem to be chicken cage on the left back. The eggs must be precious source of nutrients those days. The people were poorly dressed. I was embraced by my father from behind. My sister said in the letter that she was jealous at me for I took her father away from her. Overall, I did not feel poor or worried at all but was happy and satisfied then. I don't know why. At least I could say that I felt being embraced by our parents. In a year, my brother joined our family. All of us have chosen medical profession, my sister a nurse while I and my brother became doctors. We were never told to go into medical profession. But there was a road ready for us those days.

From now, I don't think much time is left for various activities. Recalling how I was blessed in the in the beginning of life, however, I will do what I could do for myself, for family and for the people around me.
Posted by Shin JA1NUT at 6:08 PM