My old camera, the model S100 of Canon, has acted up recently. The lens was kept out even when the switch was off. The display said it was a lens error. It has worked well for us for even 12 years for now. I have given it up and was going to purchase a new one. 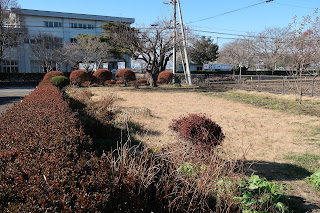 A photo taken with the new camera. No difference from the last one? It may depend on my skill as a photographer.

The next mode is G7XII by Canon. It is another compact model with a bit wider image sensor and brighter lenses. Some high end single reflex or mirror less cameras were candidates for purchase this time. I still have an old single reflex camera from Nikon. And I was reluctant to purchase anything extravagant for my life in the last chapter. This model is told to be renewed in the beginning of the next year. But the new feature of the model is believed to be such as 4K movie  function, which is not attractive to me at all.

The old S100, a very small compact camera, has worked so well for us indeed. Thousands of photos have been taken with it, which have been stored in the PC. It is the history of ourselves for the past 12 years, pleasant or grieving. I would keep this one in a box for some time.

Racalling of old cameras in our home, the very first one was a single reflex camera I boutht in my resident days, expecting our 1st son. We were not weathy enough and had to work at another hospital for a few days to get the fund for that camera. It has served us to take photos of our children from baby to grown up days. I have still kept the negative films taken with it and have digitalized them into the computer.

Needless to say, the photos are telling the history of our family. With this new compact camera, I will go on taking some more until the end of my life.