A drive to Kitaibaraki City

I have left home purposelessly bringing the new camera early this afternoon. I wanted to take some photos to try it.

I found myself driving to the coast of the Pacific Ocean. It took me a couple of hours to drive there. Much longer than usual. I should have paid attention at the fact it was the day before New Year's Eve when people was moving from the big cities toward their home town. The traffic was pretty crowded.

There is running a highway south to north from Tokyo to Sendai along the coast. I drove up to Kitaibaraki City in the northern part of Ibaraki Prefecture. As I might have written about that before, I used to drive this area with my family when the 1st kid was small. It was easier for my wife to go for driving than staying at the tiny resident dormitory. We used to drive along the coast as long as we could return home before it got dark. We drove the ordinary road running parallel to the highway. I took off the highway at Hitachi City south of Kitraibaraki. Running the route parallel to the highway, I found there were many buildings or stores unchanged since '80s.

I went to Isohara area of Kitaibaraki City. There is an old shrine on a very small mountain on the coast facing to the ocean, or exactly, in the beach. The height is only 70 ft! It must be originally a big rock on the beach. In late 17th century, the shrine is told to be founded by a famous Shogun Kunimitsu Tokugawa, a relative to the Tokugawas governing the country in Edo, that is, Tokyo, in the Edo era. He has introduced faith in a goddess of Taoism named Tenpin shin from China and ordered them to worship her at the shrine. It used to be for one of Thagata in Bhudism. Later, both were worshiped at the same shrine.

This is the small buikding of the shrine,Ototachibanahime, on the top of "the mountain" named Tenpi San. The mountain name was evidently after the goddess they worshipped at the shrine. 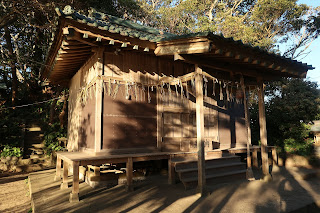 A view toward east from the small garden of the shrine. 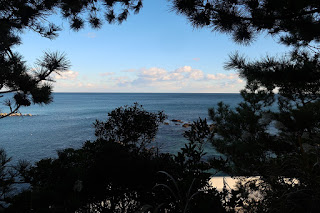 The beach in KItaibaraki City. Beautifully tinged very light beige or white. No people there. It was a fascinating place. 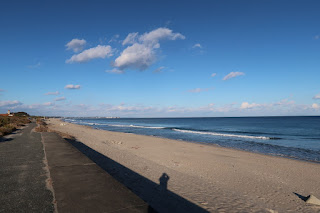 Once, I dreamed moving this area or, at least, having a cottage at a high place overlooking the ocean. But it seems to stay being only a dream for me. Nevertheless, I would visit there from time to time. It reminds me of good old days.