How I am getting along recently

Away from this blog for such a long time! I am trying to catch up with it. But things have kept me too busy to spend doing that.

Yesterday, I have gone to Tokyo for an ensemble. Yes, ham radio comes next to music to me now. I have enjoyed playing Brandenburg Concerto Nr 5 with a small company. Their skill including mine was not proficient at all. However, repeating playing the piece for 2 or 3 times, I could feel the ensemble sounded much better. So far, I am taking part in 3 groups including this one. I would go on playing with them until my health won't let me do that. I still remember of my father who has attended a bible class held in Tokyo once or twice a month until very last years of his life. It seemed like an origin for the energy of living for him. This music activity is the quite same for me as his bible class, even though the fields are quite different.

On the way back home, I took the route which I used to run coming back home from the med university lab. I have been staying in Tokyo while researching about HLA and immune response at a lab there for a few years. Late at night of Saturday, I used to drive back home on that route. The outlook of the houses/buildings around it was quite different from that time. It still had the same atmosphere as that old time. That drive was a real nostalgy for me. Yes, this kind of sentimental journey is a hidden pleasure of such a trip to Tokyo. Remebering of the good old and hectic days when I have worked and lived frantically. It has passed 30 plus years since then.

I am still working in the garden. Have planted such as broccoli, cabbage and raddish. Some new tomatoes have been added. This photo shows young plant of broccoli. 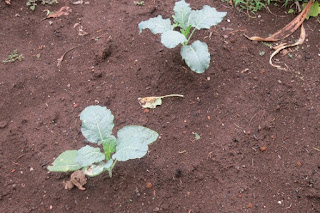 Chestnuts are falling down on the ground for now. They are not so big as usual. Again it should be due to the hot spell. I will be busy cooking rice with chestnuts or sugared chestnuts etc for a while. 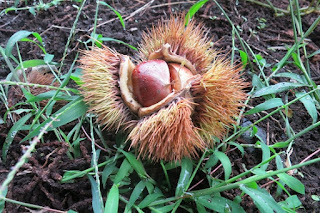 This summer was tough for veggies due to its hot spell. I was quite sure this aberrant weather including the hard hit of typhoon etc was a result of global warming. The green house gases have been increasing drastically for the past 3 decades as you may know if you google the record of the average temerature during that period. It may release the methan in the permafrost into the atmosphere. Warming thaws the ice in the poles and increases the level of ocean water. There will be many big cities lost due to higher lever of ocean water, resulting in tens of millions refugees all over the world. The drought would bring forth poor crop harevest. Fishery may be badly influenced by the hotter temperature of ocean water. These last two may cause deficit of foods. Some scientists insist 21st century will be the era of poor food production. It may cause wars around the world. We should remember the conflict in Syria was caused, at least partially, by the droungt and famine around the metropolis of Syria.

These events have been well described and warned by many scientists in the past. But it seems the measures against that are too little and too slow to be executed. People living in the developed countries are mainly responsible for that. It was a summer when I realized this problem again and decided to do anything to leave a better world to the next generation.

I hope every friend of mine visiting this rarely renews blog would have a pleasant season of harvest at your place.
Posted by Shin JA1NUT at 10:46 AM