Yesterday, I have run across with an old friend of mine, Bill, N4AR, operating from his 2nd house in Michigan. He has moved there 20 miles away from his old house there. Despite of the modest condition on 20m, his signal from a Yagi up 35 meters was pretty loud accompanied with slight polar flutter.

I have already introduced him once or twice in this blog. We have met often on 40 meters in our evening/his morning hours. He was booming in here with his big 3 elment Yagi at home. Before that, we have met when he was K4GSU, a med student at Johns Hopkins, when I, in my late teen age days, was not aware of majoring in the same speciality a few years later.

In the end of QSOs in '80s/'90s, I used to tell him I wished the inpatient ward be peaceful since I knew he would make a round there as soon as he arrived at the hospital. There could be a lot of tough happenings there.

In this QSO, he told me he had not been bored with retirement, which he made 2 years ago after a long career, and won't care for the ads of new biological meds on TV he saw even if they were not familiar to him. He was happy not to be called on the phone from the hospital and to rush to the ER at 3 AM any longer. I fully understand what he felt about those changes in life. Even though I am still a bit concerned about the new findings especially in pediatrics. I often look up about them into a textbook or Pubmed.

I knew he had had a bad ice storm which destroyed his antennas years ago. Ever since, together his interests moved into dreessage, he has not been active in ham radio. He told me he regained interests in the latter and would spend only 30% of time for the former from now. Our activities wax and wane from time to time. It seems he has returned to this hobby now.

He also told me he had just turned to 80 years of age. He made me smile saying he had not planned for that at all. I still have the image of him in the photo below, which Aki JA5DQH took in his visit to him in Kentucky back in late '80s. He seems to be physically as well as mentally active and would let me hear that N4AR booming in here on 40 meters early in our evening hours again. 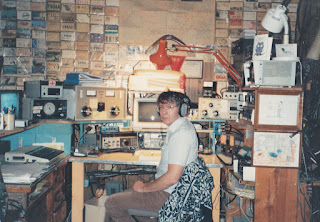