It was the 14th anniversary of father yesterday. Looking up the posts on his anniversary in this blog, I found a few of this topic. What shall I add to them as a token of this day? Detailed memories on him seem to be fading away little by little. It is what time works on us, that is, an inevitable phenomenon for everyone.

Something good and warm about him still remains in my memory, while shortcomings in his personality is going out of my view as time passes by, though. I have reached his age when he spent his last chapter in his life living with us here. I feel I could understand what he thought, wanted, worried and thrived for in his life those days. I could have done much more for him at that time. But it is relieving me a bit to remember he could spend peaceful days with us at this place. It was his dream to work with me at my private practice since he had worked at various medical facilities throughout his life. It came true even though he worked only part time there. I still feel there was something I could do for him, though.

Among the last several generations in our country, it is only us who have never experienced any war. We have lived in the peace and prosperity even during the cold war. That fragile peace under cold war has gone away. We won't experience the same total war like in WWII as my father's generation did. But, candidly, we might have some serious difficulty in the coming years, that is, in the last part of my life. Now decreasing birthrate and aging population are in progress at enormous speed in our country. Both would reduce national power and wealth in the coming years. The monetary easing, quantitative and qualitative, must leave much more debt to our country. Social security may be reduced in the near future. Or even default of our government finance may happen as well.

The other worry is that our country could be involved in military conflict occuring far away from our country. Affirmation of collective self defence, which had been denied by the governments before Abe administration since WWII based on our constitution, was approved by the present government a few years ago. It would lead us to military conflicts abroad or to terrorist attacks in our country.

My father used to be concerned about the problem of war responsibility for WWII. His concern might be due to his compulsory service in WWII for 6 years in his twenties, when he has experienced all absurdity and violence in the army. I have written about it in the other posts. He would have protested against the present government for their belligerence from authoritareanism. I would do the same way as he might do in this situation.

Lately, not too often, my father shows up in my dream. He used to have stern look in it but nowadays looks gentle and warm to me. It might reflect my self justification, maybe. I still believe he would say to me "Don't worry, we could do only little, just love family members and stay faithful to the people around you." I won't be too anxious about the present situation. As my father used to live in his last years of life, I would live in faith and good will to the others.

Oh, I have talked too much of myself. I still spent today thinking of my father who used to quietly do with the garden almost everyday. My heart is full of gratitude to him for his help, support and faith in me. I won't forget him. I would spend the last chapter of my life as he did.

Have I uploaded this photo before? It was taken at the small sanathorium for tuberculosis back around 1950. My sister with them. 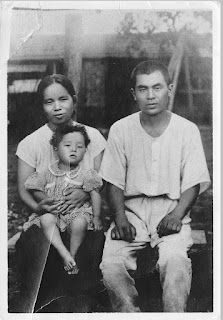 Twenty four years ago, their anniversary of golden wedding at a restaurant in a city nearby. All 5 members of the family. My sister used to work as a nurse while brother is still working as a psychiatrist. It might be one of the best time for my parents in their lives. 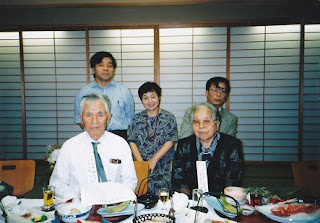