A famous Russian cellist, A. Kniazev, used to play the concerto by Dvorak at a concert of NHK Symphony Orchestra 6 years ago. A friend of mine has come to listen to him at that time. In a few days, he has taken the seat very close to Kniazev at another concert. Kniazev was one of the audience then. My friend has talked to Kniazev asking for his signature. Praising him for his performance with NHK S.O., my friend heard an unexpected story from him.

Kniazev wanted to get a DVD of his performance but was denied for that request by NHK due to the right of authorship or something. My friend has asked for any record of that concert for him in a SNS. I have been eagerly recording the classical concerts on TV at that time. His Dvorak was one of my DVD collection. I told him I would be pleased to give it to Kniazev. The DVD was successfully delivered to Kniazev through my friend later.

Kniazev has given me a set of unaccompanied suites by Bach of his performance with his signature as a token of his gratitude to my gift. Needless to say I was most thankful for such a gift. 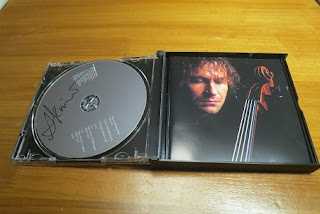 Last night, coming into the livingdining room, on TV, I happened to hear him playing the very last part of Saraband of the 2nd Suite by Bach. It was an encore for a concert of Dvorak concerto with NHK S.O. held in last Oct. Fortunately, it was again recorded in HDD, so that I could listen to the concerto and the encore. His performance was a passionate song through dim background. His cello might be taken as a bit dark in tone. However, his will to express himself with passion was so remarkable. What deep vibrato! I have enjoyed it very much. Here is a video clip of his performance of Suite Nr2 and Nr4.


This Nr2 Suite is covered with the emotion of lamento and melancholy. In an interesting book titled the Cello Suites, Eric Siblin has speculated that this piece might be composed by Bach when he lost his 1st wife. Whether it is historically true or not, this music sure moves us with that tone of sorrow. Kniazev used to lose his wife in an airplane crash years ago, which he was also severely injured. While he was playing this Saraband, I wonder, what has come in his mind.

Anyway, I was glad to encounter him again last night.
Posted by Shin JA1NUT at 4:16 PM