I was born at this same place 64 years ago as we live right now. My aunt has started a small sanatorium for tuberculosis here around WWII period, when no antibiotics etc were available and most tuberculotic patients were destined to death. On belief in Christianity, she seemd to have found calling in this enterprise. She has built this facility at a lot her parents, that is, my grandparents had owned in a countryside.
There were a number of literally cottages for each patient among many pine trees. One of my first memories in my life was a hymn flown on a breeze through those trees. My aunt was organizing service every morning. She did everything for the patiens like preparing meals etc. A very poor community from the standpoint of material aspect. But it was full of spiritual pleasure, I believe.
It was where my parents had met and married immdeiately after the war was over. They were blessed with three children, an elder sister, myself and a younger brother. Sister has become a nurse while brother and I have chosen the way to be doctors later. My parents have worked very hard as a nurse and a worker at this sanatorium.
One time, a newspaper has criticized her and this sanatolium in very impolite way. It was against the reality. Later, I have learned that mass media could report in sensationalism not based on the truth. It was the time when Streptomycin etc were in the market and could be given the patients with marvellous efficacy. My aunt decided to close down the sanatorium. Our parents have decided to move down to a suburb of Tokyo, where they found positions at hospitals.
This sanatorium was not conspicuous at all. It was just to have been with the dying patients. Some of them have come to believe in Chiristianity and have spent relieved and peaceful time for their last days. It doesn't need to be remembered. I won't boast of this facility or of my aunt. No wonder it is already forgotten and left in the darkness in the past. However, the memory of this place is still vividly alive in our minds. We, brother and sister, were not told to study for medical profession. But I am sure this experience of life in young days has lead us to what we are now. I still feel thankful to it.
Nowadays, I often recall of this poor but hopeful place. In our country, financial collapse is inevitable due to the national debt. The politicians won't care for that but still order them to issue more and more our currency. The bureaucrats are not getting ready for the possible collapse since they are not ordered to by the politicians. The greedy tops in the economic society are not taking responsibilities for what will happen at all. In several years, we should experience this kind of poverty again. Could we still be hopeful for the future as my aunt or parents used to be? We should be ready for this possible chaos. What should we aim at that time?
This photo was taken at the sanatolium in 1954. In the front row, my sister and myself. I was 4 years old and was standing between my father's knees. My father was 34 years old. In a year or two, this sanatorium was closed. Our family has experienced an exodus to Tokyo. ﻿ 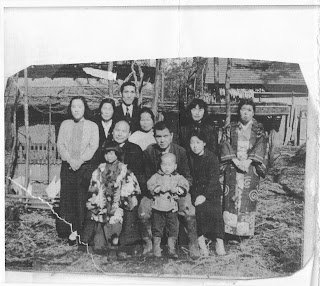