An ancient tomb in late fall

It was over ten years ago when I noticed a small hill in a rice paddy along the road I commuted to the office everyday. It has several trees on it. In spring and summer, they are abundant with fresh leaves while they drop in fall. It looked so quiet as if time had stopped around that area. One day, I was so curious to know what the hill was that I stopped by there and searched for it. The explanation at the place told that it was an ancient tomb where a head of this region was buried in the 6th or 7th century.

I learned later that there had been dozens of such tombs in this area. I was a bit impressed there had been so many tombs for so long period. They might have been religious objectives for centuries. As an evidence that it has been respected by the people around this tomb, there was a small shrine on the top of the tomb hill. I suppose the oridinary people have been praying for their ancestors at this place from time to time and have lived their lives from a generation to another for centuries. I felt close to them, the ordinary people, who have passed in that way.

Maybe, I belong to one of them. 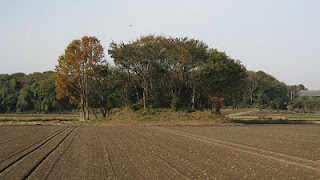