It is our 42nd anniversary of marriage today.

Though it was not the reason why I went for haircut today, I went to the barber that I had been attending to for the past 2 decades. As told elsewhere before, he and his wife are the grandparents of a girl, whom I cared for since her babyhood as the doctor in charge. That girl has beautifully grown up and is working at a real estate company in Tokyo after graduating a university now.

While haircutting, he told me there had been less customers visiting him apparently due to the pandemic. He would retire soon. He is already 81 years old now. In order to get the fund for retirement, he has tried to sell his barbershop for some time. With the economical recession, there are very few needs, if any, for real estate in his area. His public pension is not good enough to spend retirement. At his age, however, he thinks he should make decision for retirement soon. His daughter, that it, the mother of that girl may help him to live on in his retirement.

On the way to a super market for materials for dinner, I dropped in a cake shop nearby there. I bought a couple of small cakes for the anniversary. Again, I used to be the doctor in charge for the shop owner and his wife's daughters. There were a lot of people at the shop. Over their shoulders, recognizing me among them, the owner has made a bow to me. I was inclined to ask him or his wife how their daughters were doing. But the crowd at the shop has prevented me from doing that. Their daughters must be already in mid twenties of age. Either of them could already be married. Looking around the shop and personnel working hard there, everything seemed the same as 20 years ago. But people are changing with their lives. 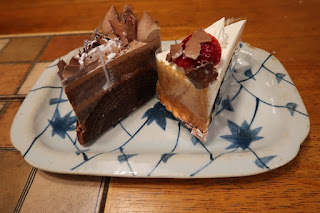 Forty two years since we got settled down at a resident house of a local med school. In a year or two, this photo was taken in the campus. I might have uploaded it before. Just forgive me if you remember of it. We were just at the departure of our voyage, long as well as short in a sense. Having a lot of dreams for the future, we saw everything so brilliant and hopeful. Least imagined how we are right now. I only feel grateful to my wife for her endurance and support to me, even though I seldom thank her for that. We had something lost which we could never regain in our lives. However, I would go on the last chapter of our lives together with my wife as we have done for the past 42 years. 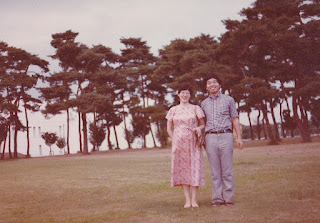