It's getting cooler in the morning here. I have driven south in the rice farms and took a walk yesterday morning. The sun has just risen. Even though it was still a bit humid, breeze coming through the window was comfortable. It had been the commuting route to my own clinic until I retired 8 years ago. 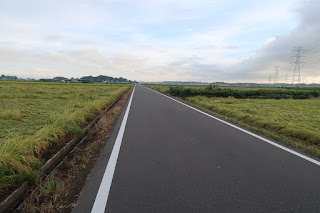 The rice plants were almost laying on the ground possibly thanks to its weight. I always wonder how farmers harvest those plants. I have met only a lady walking in the same place. A quiet and serene place. 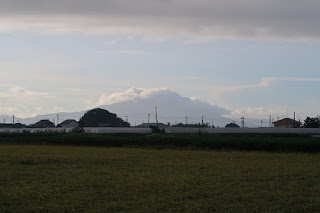 The mount Tsukuba was seen south east of the place. As depicted elsewhere, it is the highest mountain in the north eastern part of the Kanto plain, even though the absolute height is only 877m asl. From its conspicuous figure, it has been an object of the folk religion in this area.
As also written before, in this season, having the car windows/sun roof fully open, I often drove to my office, listening to G Dur String Quintet by Brahms or h moll Orchestral Suite by Bach at maximum volume. What a joy it was! I won't return to that time but still recall those days for a fond memory. What I thought those days came back to my mind together with the memory of such commuting trip. 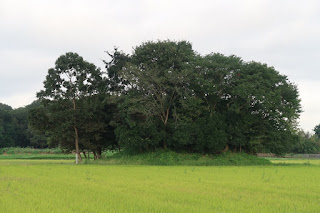 This is repeatedly taken up in this blog, a Bentenduka tumulus. A tomb for a big person in this area possibly over 1000 and several hundreds years ago. As an object for the religion for the ancestors, it might have been worshiped by the people. Ever since the days when it was built, there had been eras of battles continued until the feudal system of Edo was established. In the battle era, people seeked relief with such a folk religion for this tumulus, I believe. Thinking of that, it won't stay being a historical monument but is imminently approaching to our mind as a symbol of the people's thought those days.
It was another refreshing morning walk. I would return there from time to time.
It is the day today when I drive to my sister's home in Tokyo and to enjoy ensemble with my sister and her daughter, that is, my only niece. My nice, working as a head nurse of novel corona virus infection ward in a big hospital in Tokyo, was anxious that she could bring the virus to her parents. But, in the declining phase of the infection so far, we have decided to get together today. Loading my instrument on my car, I will leave for Tokyo in a few hours. A big trip, though only a couple of hours drive, for me.
Posted by Shin JA1NUT at 6:41 AM