Visiting shrines and temples is not my hobby. I am interested only in the history especially of ancient common people who spent their lives in this area. Anything reminiscent of those people attracts me.

On the way to my former office, there is a shrine named the Gosho Shrine. There are a few apartment houses next to it and some offices close to them. Everyday when commuting to the office, I have driven aside the shrine. I have never seen anyone in the precincts even though it was neatly cleaned. I have had a faint desire to visit there someday.

A few patients living in this area were attending to my office almost 20 years ago. Whenever I drive there, those children and their mothers come up in my mind. I always wonder how they have grown up by now. That was another reason why I wanted to stop by there.

Several days ago, for a change, I went for shopping to a super market in the town of my former office. The shrine was on the way there. 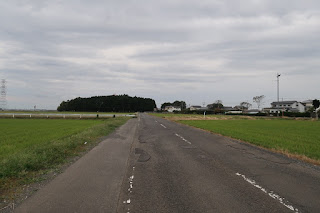 The guardian forrest north of the shrine buildings was seen far on the road, that is, my commuting road. Very little traffic or people. 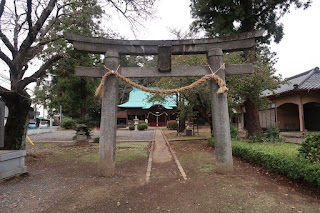 The gateway to the entrance to the shrine, a torii made of stone, was recorded to be constructed in 17th century. The explanation said it had the background of foundation back in the 8th century. But it is more probable that it was actually founded at the same time when the stony torii was built. 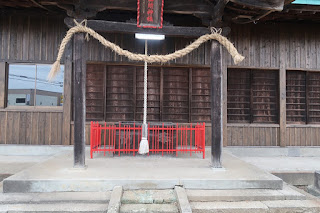 The main building of the shrine. I could not help smiling there was a light above the offertory box. People may gather this shrine in the new year days for worshipping and probably in the summer for the festival. I have never seen those events, though.


I am reading a book regarding the possibile sustainability in the population reducing society. The researchers have investigated it with numerous variations under different conditions put into an AI in order to find the possibility in our country. In a nutshell, the result was that we should seek not centralization to Tokyo but regional dispersion. The author proposed the new community formed in the guardian forrests/shirines. Of course, it is not to advertize Shinto religion but to utilize shrines as the center of community, which is nowadays lacked in the society. He says there are roughly 80,000 shrines all over our country. They used to be a local cultural center in the region. The guardian forrests could be a source for energy generation as well. The tradition of the shrines may attract people as well. This looked an interesting idea. A new policy or rather a paradigm shift for decentralization should be searched. The present centralization could not be sustained for sure.

After taking those photos, with a slight anticipation I might see some former patients around there, I went for shopping and got some materials for dinner. Of course, no one I used to know was there or in the super market. It has been too long for me to recognize them even if I should ran across with them somewhere.
Posted by Shin JA1NUT at 11:21 PM