I have been to Tokyo Ham Fair on Aug 31st. It has been a week or so since I started writing this post. But I haven't finished it yet! This evening, I have met Steve JS6TMW on 40m CW. That QSO has hastened me to finish this now!

I was rather reluctant to go that event at first. But Steve told me to come to see him there by any means. I was interested in him with career as a medical economist and also in the book he had introduced me as I mention later in this article.

I left home earlier than it was expected to be there in time. Forgotten that the event was held in the South Wing but not in the West, where it used to be held for the past years, I was almost lost and walked around a lot in the West Wing. Finally, I asked a concierge lady about where it was held. She kindly let me know this event was held inthe South Wing. This event venue was too complicated for an old country retiree like me to get to the right place.

The outlook of this event place nicknamed Big Site, which will be used as the media center etc in the Olympic games next summer. Hopefully, visitors from overseas won't be lost there. 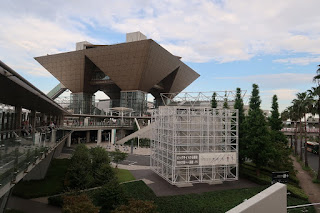 At the entrance of the event, there were already 3 persons gathering. Steve JS6TMW, Yoh JL1MUT and George 7J1ATG. In a minute or so, Hiro has appeared there. I knew Steve had sent me a message through the Facebook later when I came home. No smartphone with me! Anyway, we were pleased to finally get together there.

Since most of the restaurants were already closed preparing for refurbishment to the media center, it was tough for us to find the seats at a restaurant. When we were settled down at a restaurant, we toasted for this lunch meeting with glasses of beer. As always in such a ham meeting, we have had a lot of things to talk about.

Steve, JS6TMW, originally from NY where he started ham rqadio in his teenage days, used to study electrical engineering at UC Berkeley and has found a job at a medical instrument company. He seemed to be interested in medical service and has turned to the field of medical economy. He has gone through his career in it and is still working temporarily. His marriage with his Japanese Okinawan wife brought him to Okinawa in 2004. In 2015, he has come back to ham radio with help of his old ham friend after a long absence in it. He also inherited a lot of old ham radio equipments from his father in law, JA9BB. He looked like a teen age boy when he was talking about home brew rig, old radios or home brew antennas. Okinawa is located on a path of most typhoons and is apt to have gust of winds in summer. He finally put up a stout crank up tower and a tribander on it, with which he won't worry about the gust any longer. He has had a serious embolism in coronary artery last year right at the moment he was doing with the antenna on the roof. With good care of cardiological sureon, he could survive and has rehabilitated successfully. He was a good walker, at least, better than me.

I was interested in him as he put up a post in facebook which showed a receipt of 150 JPY for a visit to a medical facility. Pretty cheap even from our standard. It might be a real surprise for an American guy that he could have medical treatment at such a fee. I knew he had been involved in the medical service as a medical economist from his bio in QRZ.com. He was grinning to hear me saying that medical service would be possible only with the low wage and long hour duties of medical staff and it would be bankrupted sooner or later.

In one of the latest QSOs, Steve has introduced me a book titled "The Emperor of All Maladies" written by a doctor, Siddhartha Mukherjee. It depicts on the history of cancer. It was awarded Pulitzeer Prize. Since it was a pretty voluminous book, at first, I was hesitating reading it. Reading it, I knew how attractive it was. It surely reminded me of the days when I was given training as a resident. My very first patient was a girl with intractable leukemia. She has died after spending hard days with various chemo for a year. This book has brought me back to the days I was anxiously treating that girl every day. I could never forget her asking myself if it was the best choice for her or not. The description of each episode the author wrote in this book is backed by his experience. It makes readers zealous at it.

I have worked George, 7J1ATG, for many times especially since he built a remote control station in Izu peninsula. He has started his career as a radio operator on ship and has made voyage all over the world. Later, he has changed job to that of computer security. It seems he owns his business and travels a lot around the world. As a matter of fact, he has own stations in UK and VK4 in addition to JA. He loves making QRP radios by himself in addition to, of course, CW.  I prefered his concise operation style to those rambling on endlessly. As I told him that, he prankfully smiled at me and said I had been too quick talking on CW. I should learn his way of operation a bit more. Both of us have a daughter working as nurse. We have talked about them on the air in the past. She seems to work in VK land at present. Asked by me if he felt relieved to have such a care giver in the future, he again smiled saying she was a bit cool to family members. I don't believe that, George. He was told by Steve to join us there. It was nice to meet such a friend all after many QSOs on the air. I could not feel it was just the very first ever eye ball for us.

Yoh, JL1MUT, was another guy whom I met for the first time, even though we have had a few QSOs in the net, named All Asian net? managed by Lou, VK5EEE. Possibly due to the similarity of the suffices and our high activity on CW, I have been sometimes counfused with him by oversea guys. The youngest ham in this lunch meeting. He is working for a communication equipment company and lives in Kamakura. It seems he has loved CW for a long time and has been involved in the net for years. Since Lou has gone to HS land this spring, the net has had fewer members now as he said. We have discussed why Japanese hams won't enjoy ragchewing on CW despite of studies in English devoted mainly to preparation for the entrance exam of universities. As a young, at least among us, CW operator, hopefully, he would lead the younger CW operators from now. Steve has been a regular participant in the net and has told Yoh to join this lunch meeting.

The last but not least participant was Hiro, JA7WTH, whom I have known for the past several years. He has actually started learning CW for the past 5 or 6 years. He is an experienced pediatrician. He is a graduate of the med school my brother did as well. That is why I have become close to him. He is enthusiastic for remote operation at present, which I know nothing about. He has brough the system in a snap bag. He is a great challenger for new tech and CW.

Spent a couple of hour at the restaurat, we got out of there. Steve headed back to the hotel where his wife was waiting for him. Too bad that I have not taken a photo of him and the others.

At a cafe, we have spent another hour without Steve. This is a photo of three of us. 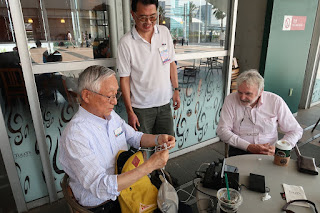 Hiro was setting up the remote control to his home station. From left to right, Hiro, Yoh and George. Hiro successfully worked with a station in JA7 using this tiny set up.

We have parted there promising QSOs on the air or in eye ball in the future. A fun time. It was worth going to see them from this countryside.