It has been a cold snap covering our country for a month. They have had much snowfall in north west Japan. It's been far below the freezing point here every morning. They say El Nina phenomenon plus the meandering current in the Pacific Ocean causing this aberrant weather. In Australia, news says, a hot wave is hitting Sydney. In the US, there have been a hard cold snap in the East Coast while a torrential rain has caused land slide in the Sothern California.

I could not help suspecting these are an expression of the global warming. The global warming of the climate change is thought to cause shift to extremes in the weather.

This abnormal climate has caused the rise of the vegetables' price in Japan. Lettuce, cabbage and the other leefy vegtables are becoming more expensive by 2 or 3 times than usual. So are the other vegetables and even the other foods even if soaring of prices are not so marked as the former items. This means our country is so vulnerable to the climate change as for farming products. Considering of food self sufficiency rate in our country, social security for foods has turned out to be very fragile due to such as the climate change or the disturbed imports of the farming products. If the drought causing poor crop harvest in the summer could occur, the result must be devastating.

I have planted some vegetables last fall. Some of them have stopped growing or even died due to this cold snap. However, the other vegetables like this chinese cabbage have survived. There are still some spinach or potherb mustard surviving in the farm. Broccholi may survive and start growing in the spring as well.

I should get ready for the upcoming another hard winter.

A chinese cabbage harvested today. It is bitten by bugs, which is a proof it was grown without any pepticide. It would be a material for hot pot cooking soon. 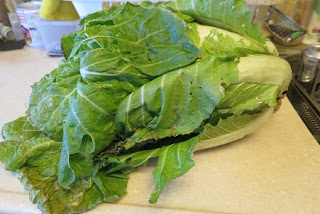