Another trip to Takamatsu

We have been to Shikoku seeing the parents in law on Monday through Tuesday this week. It has started my wife had fallen the ticket for a reserved seat and a credit card at a local station. She realized that in Tokyo. All she could do was to purchase another ticket and took the train planned. A kind conductor in the bullet train has taken contact with the lost and found office of JR. He let her know those items had been delivered to the station office where she lost them. We were grateful to him and the person who kindly brought them to the office. I could not blame her at all. It was me who had a difficult time finding the ticket at the station where we exchanged the train bound for Shikoku. We could not help feeling the senility had creeped toward us. Anyway, all's well that ends well as they say.

On a bullet train, a box lunch has welcomed us. 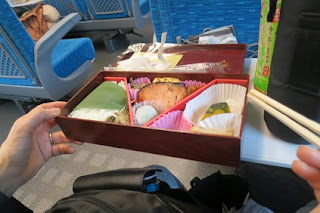 In Takamatsu, there was a remnant of the Castle Tamamo close to the ocean. Only castle wall is left. The moat around it was sea water, that was pretty rare historically. 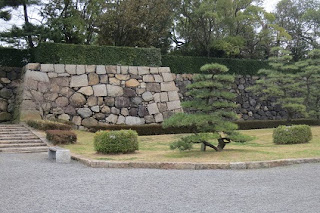 For dinner, we wanted to take something gorgeous like a full course of French. But the restaurant we went for that was closed. It seemed that the restaurant was for a meeting of the members of a juridical person, which worked to distribute funds to medical facilities. They are ”pocketing" a portion of the medical fee that should has been paid to the medical institutions. It sucked me a lot!

In stead of that planned gorgeous meal, we took a popular noodle for supper at a restaurant in downtown. Noodle is famous there. My wife told me how she had enjoyed it in her young days. Even noodle without any toppings was a feast for her those days. 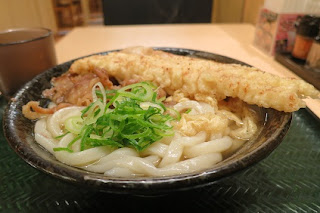 The father in law, 91 years old. Pretty well for his age. He has had a variety of illnesses but has only hearing difficulty of an ear now. He said he had been to walk in morning every 2 or 3 days. He reads much and watches TV a lot, especially drama of old days before Meiji era. The mother progressively ill with Alzheimer could hardly even open her eyes. Father told she took meals well. Otherwise, she seemed to be asleep. I felt living safe everyday itself had been their work now. We have had lunch at a restaurant nearby together with a sister in law. Even though it was only for a limited time, it was a fun to talk about something trivial and old. Father has had a half glass of beer. He looked more cheerful and happy. He has told on old days when he had meeting having sake with his folks and the neighbors. Later, when we got back home, he told my wife on the phone it was one of the happiest times for him having that lunch with us. It has made me even happier. 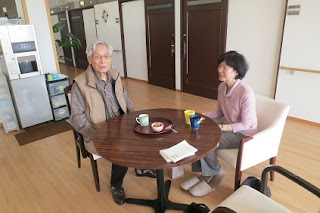 It was worth visiting them.