Maybe, in several years, if the flutist is patient enough.

My wife has started taking lesson for flute. She has never played this wind instrument in the past. She used to say she dould get hyperventilated when playing such an instrument so that she won't do with it. Finding a flute class close to her office, she seemed to have decided to start it. Who knows how long she would go on with it? I should say bravo to her only for her starting it.

We used to play ensemble when we were young. She played a bit of piano. In our wedding party, we played "Apre Un Reve" by Faure as I have already told somewhere in this blog. It was a real appropriate choice of music! 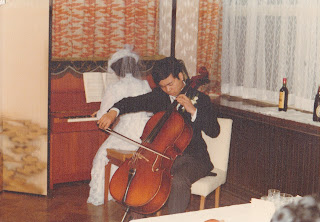 One of my rascal friends told me it had been the only chance we could force those attending the party to listen to our performance. Of ourse, we did it. We had been practising this ensemble at a student hall of our university immdiately before the wedding in the morning.
Now, since our daughter is pretty good at violin though she has not touched it for a few years, we might have a family ensemble like baroque trio. The problem is if my wife is patient enough to carry on practising flute for some time. Let's hope she is.  Maybe, hopefully, in several years. ﻿
Posted by Shin JA1NUT at 11:18 PM