A fellow travellor of life

As written somewhere in this blog, this place, my birth place, used to belong to my mother's family. My aunt, an faituful Christian, founded and managed a small sanatorium for tuberculosis patients before and during the WWII. Tuberculosis was a fatal illness those days. It was prevailing among not wealthy people. They were often separated from their family members. My aunt has accepted those people desined to death. Yes, it was a kind of hospice, even though it was not equipped for any advaned medical treatments or medical staff. Based on belief in Christianity, they were keeping a small community for themselves.

After WWII was over, there came on the antibiotics effective for tuberculosis. Judging that sanatorium was not necessary in the society any longer, the aunt has closed it. It was the time for our family to exodus to Tokyo. Nearly 3 decades later, I have come back to this area for the residency as reiterated in this blog. In the beginning, we intended to come back to Tokyo for further study and training after the residency. A few factors, such as having our son to our family, decision of my parents coming back from Tokyo to this place to spend their retirement or fascination of rural way of life etc, have made us decide to be settled down here. First of all, we wanted to go out of the narrow and nasty resident house in the medical school hospital.

It is difficult for me to conclude if it was a right decision or not. There could have been, I believe, the other ways of life if I had not been settled down here. No one knows. It is of little use to imagine the other possibilities of life at present. The past is past and unchangeable for now. I should acknowledge it as it is and should gratify what I have been given here.

There is a big chestnut tree in the eastern end of this property. It must be over 40 years or more old. It seems to have been grown spontaneously there while there was no one caring for this land. Every September, when it blows a bit cool breeze telling us the arrival of fall, it would invariably bear so many chestnut fruits. Sometimes, we are inclined to cut it down in order not to be troubled with chestnut cases fallen on the ground. When I find the chestnuts fallen on the ground in the season, pulling myself together, I would collect them on the ground and confirm the fact this tree has lived the same history as we have. 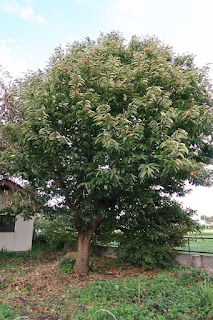 As I have always done in the past years, I peeled the case of chestnuts and froze them in the refrigerator. To make chestnut rice shown as below. It is a bit of work for me. But I have stored them divided in 8 packs. They are good enough to enjoy it throughout a year. Isn't it a good gift from this tree? 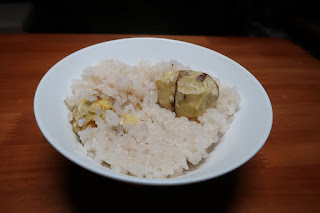 I might feel this old chestnut tree as a fellow travellor of life.