We will have the 38th anniversary in a couple of days. The time has passed quite fast. The longer marriage we have had, the more we know each other. Even though I don't know what she thinks of that, it is not bad to get older together.

We were the class mates at the med school. She is 3 years younger than I am since I entered the school after finishing a college. We have started our honey moon life at a dorm of the med school where we served our residency. Hectic days. I should have been more helpful to her raising our elder son those days.

I have uploaded this photo before. At the campus of the med school. We were young. We were expecting our 1st baby. How hopeful we were for our future! 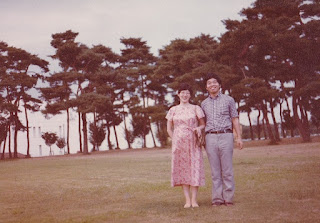 We have moved here, that is, my birth place in several years. I felt we need some place to be settled down. I must confess a place for bigger antenna was necessary for me. My parents have moved here and have helped us to raise 3 children.

It was the time without cell phone. She has taken a ham radio ticket to get in touch with me through radio. She got her call as JG1FDX. Only on phone. She was too shy to talk to people unknown to her. We used UHF FM to get in touch. When our daughter was learning violin at a class near to my wife's hospital years ago, I have brought her with violin to a place half way to the class. She was waiting for us there. We couldn't do that without that UHF.

One time, I borrowed her car. I happened to turn on the cassete tape recorder on the car. Surprisingly, Morse code practise tape was running there. Yes, she was practising Morse code in secret. I asked her why she had wanted to master code. Her answer was that she would beat me in Morse code technique. I think it was half what she had thought. She is a girl who would learn something continuously. She might find learning Morse code was a good object for her to master. Since her project turned out public to me, she gave it up thoroughly. Her ticket with the suffix, "Fanatic Doctore XYL", has been expired then.

As written earlier in this blog, she has enjoyed our trip to Seattle and San Jose 3 years ago meeting many friends of ham radio. Someday, I would take her for a trip to the US or the other parts of the world to see old friends of mine. She won't say no to me, hopefully.

As I fully retired last year, I have become a full time house husband and have been trying to help her. She says she would downsize her work load soon. Introducing her old patients to other reliable doctors and getting ready financially for the retirement of the staff, she should gradually fade off at her job soon. I wish we could spend peaceful time for the rest of our lives.

Congratulations to us on our anniversary!
Posted by Shin JA1NUT at 12:11 PM