Staying at home throughout the daytime yesterday, I wanted to take a walk on the way for shopping. It was a bit far away south of my home but I have driven to an western skirt of Mt. Tsukuba. Not for sight seeing but for a walk!

It took me some 30 minutes to drive there. It was past 3PM and was getting cold.

There was a cycling road along the western margin of this mountain, the only mountain in the north-eastern part of Kanto plain. I knew this road was converted from a raiway running north south around the mountain and abadoned in 1987. A row of cherry trees were planted on the both sides. Either due to being too late for a walk at that time or not, there was very few walking there. You may see everything was red tinged with sun set color. Yes, it was already less than a month before the winter solstice came. 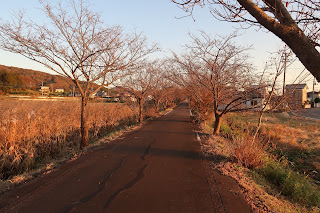 This Mt. Tsukuba is only 877m above sea level. Even though it is not high at all, it is surrounded with plain area, which makes it is conspicuously visible from everywhere all around. This outlook has attracted ancient people's religious interests and has been worshipped itself by them. There is an old shrine halfway up there. I have already posted some photos taken in a drive on the ridge. There is a nice drive way there. I used to take family every January to a large park covered with lawn on the mountain and snapped some shots. It was the days when children were small.

The mountain is located in the most southern part of Yamizo mountains running from the border to Fukushima north of here. As depicted elsewhere, ridges of low mountains are seen north and south in northern part of Tochigi/Ibaraki. The mountain was again colored with the setting sun ray. Deep orange or red. The forests and trees were also in fall color themselves. 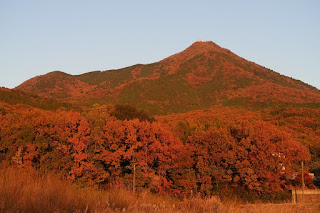 Another shot from far away. Getting dark and chilly. 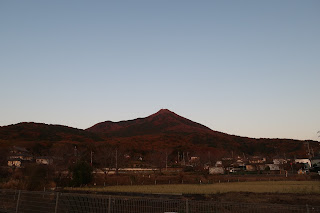 There were a lot of old houses, mostly of farmers, I believe. This was a house with long entrance way with a big gate. 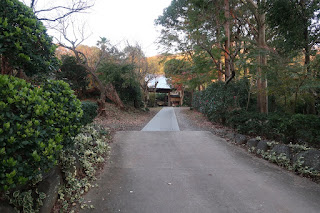 Walking around on a hilly place, my legs were screaming. I felt I needed more walking. Sun has almost sunk in the horizon at 4:30PM. Terribly chilly. only 5 or 6 degrees C. Hurried to a supermarket nearby there and got some nice items for dinner.