A memory of university orchestra days

Having admitted the med university, I was busy at the tennis club. Liberal arts studies were not very attractive to me. No professional studies at all then. I was spending slow and free time residing at a dorm in the campus. Talking to friends and sometimes as described later, enjoying primitive ensemble until late at night, I and the room mate used to go into sleep listening some music in our topic or seemingly important to us. We always get up late! in the morning. Sun was shining brightly through the window. With simple breakfast, we again listen to FM radio program broadcasting some classic music. Or some music recorded in cassette tapes. We were making music repertoire with those cassettes. Wearing tennis tennis-wear, I attended the classes around noon. Or exactly speaking, almost in the afternoon. As soon as the classes  were over, I headed to the tennis court and played it until sun set. It was as if the time would go on eternally in the same way as the other silly youngsters spend their precious young age.

Honestly, I wanted to join the orchestra, which was a joint with a women's university. Shyness to girls has made me me hesitate to be a member of the orchestra. Late in fall, the room mate at the dorm suddenly proposed me to join it together. I was almost glad to have someone who would join it with me. No reason to deny that proposal. We went to the club room, which was in the hospital campus in the center of Tokyo. Being asked what instrument I would play, I answered "Cello" without any hesitation. In the summer camp of the tennis club, I happened to watch a program on TV which showed Tortelier playing Bach. I was instantly fascinated at his performance as well as the instrument itself. Without that encounter to cello in the TV program, I could not become a cellist.

I went to the women's university campus to get the instrument they would lend to me. It was late fall. Cold wind was blowing through the entrance to the club house, a tiny shabby cottage, in a pine forrest. Leaves of the trees were fallen. I was nervous since it was first visit there. It was a not virtuosity instrument at all. One of the cheapest models produced by a japanese manufacturer was wrapped with a cloth case. It was still an important instrument which invited me to classical music performance.

I was pleased to have that cello. I still remember how excited I was to get back to the subway station nearby carefully carrying it under my arm. Lesson by the string instrument trainer of the orchestra, who was a cellist at a professional orchestra in Tokyo, has started. I attended to the lesson once a week. Even though I was not very serious learning it, I have finished a text for beginners named Werner's text in 1.5 years. I should have studied scale, bowing or the other basic techniques, as I look it back. Repentance always comes late as the other things in youth! Anyway, in the evening, I always took it out of the case and practised it for a while in the dorm room while the room mate went to the student hall for practice of oboe.

In several months since I started cello, I have began playing ensemble with friends, even if I was not good enough to play anything yet. A friend of mine, who has become a professor at a university later, has brought Hendel's recorder sonata. A minor sonata in it was impressive. I am often playing it with my wife now. Another guy, owning practice in Chiba now, was proudly playing his old violin. His forte was the 1st theme in the 1st movement of Mendelssohn's concerto. I have never heard him playing more than several bars of that piece, though. I often played some simple baroque sonata with him. Basso continuo was my role. Such fun time seems to be endless at that time. 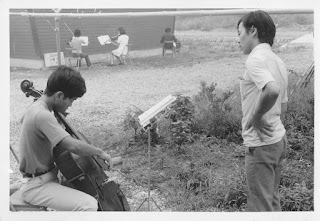 Practising it at a summer camp. The right person was the part leader pretty good at it. He might be giving me some advice.

In a year, on my request, my parents have given me the money to buy a new cello. It was not a gorgeous one at all made in East Germany. But it cost as much as my parents earned in a month. I could not be more thankful to them since they have never complained of the expense for that. Unfortunately, that German cello often had a problem in the neck. I have given it up and got a cello which belonged to the club and had been played by a member, who was pretty good at it. It sounded good especially on C and G strings. Deep and beautiful sound. Using that instrument, I played "Apres un Reve" of Faure with my wife at our wedding party later. I wonder who is taking it over in the orchestra now. I would try it again myself.
To be continued, unless any comment says just stop it...