We have been in cold waves without any intermission for the past 3 months. The temperature sometimes falls below minus 10 degrees C early in the morning, which is quite unusual even in this area. They say it is due to La Nina phenomenon, which is caused by cooler sea surface temperature in the central and eastern Pacific Ocean. I believe it is an expression of extreme climate change but not global cooling. Whatever it might be, it has been terribly cold everyday. They say this will persist until the end of this month at least. In the day time, however, it is getting a bit warmer when sun shines. I have already started working in the garden. Something like pulling the weeds or plowing small farms in the garden. It is of fun for me to do with soil.

The cabbages in the garden farm have gone through this abnormal weather since last fall. Having the sheets against cold weather on them, they have survived even the snowfall last month. I have harvested one of them, which looked pretty ripe despite of small size. Outer leaves were bitten by bugs last fall. It still seemed edible, though. 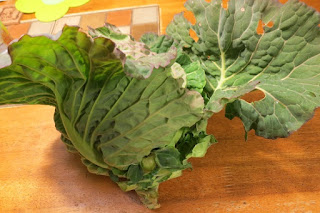 I have used a portion of this precious cabbage for pepper stuffed with meat this evening. It was the first try for me to cook it. The seasoning was oyster sauce. Pretty successful. 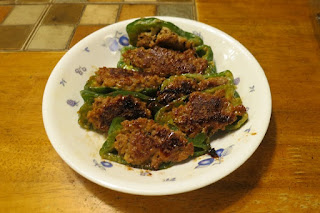 Now a cabbage costs about 3 or 4 USD. This cabbage, a survivor of this cold season, is economically quite helpful to us! It is free from chemicals as well. I am planning to plant more cabbages this fall.

I have never waited for spring so eagerly as this year in the past. One reason might be that I became older and was vulnerable to the cold weather. Anyway, the warm breeze would be most appreciated soon.
Posted by Shin JA1NUT at 11:06 PM